The absolute last think I wanted to happen was to have a bolt break off in the engine block.  And that's exactly what has happened.  Although now that I'm really thinking about it, I think it technically broke off in the timing chain cover, so that's slightly better.

I was trying to remove the alternator cover on the front of the engine (see below) and even with all the penetrating lube I could throw at it, the bottom bolt did not want to budge.  It started turning with a lot of resistance, and eventually snapped.  I wasn't going crazy on it or anything; I only used a standard Allen wrench. 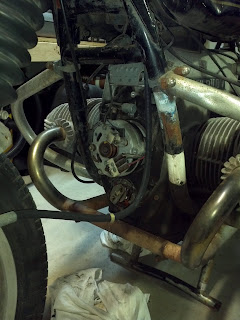 I think the bolt may have been bent, because there was some impact damage to the cover right at the head of the bolt, so this may have been unavoidable.  So it goes.
It wouldn't be fun if everything went exactly according to plan.

The reason I wanted to get this cover off was to see if there was any way of turning the crank under there.  I wanted to test if the engine spins freely.  Turns out I will have to dig deeper to turn the crank from the front.
Posted by Andy
Labels: airhead, BMW R100, motorcycle