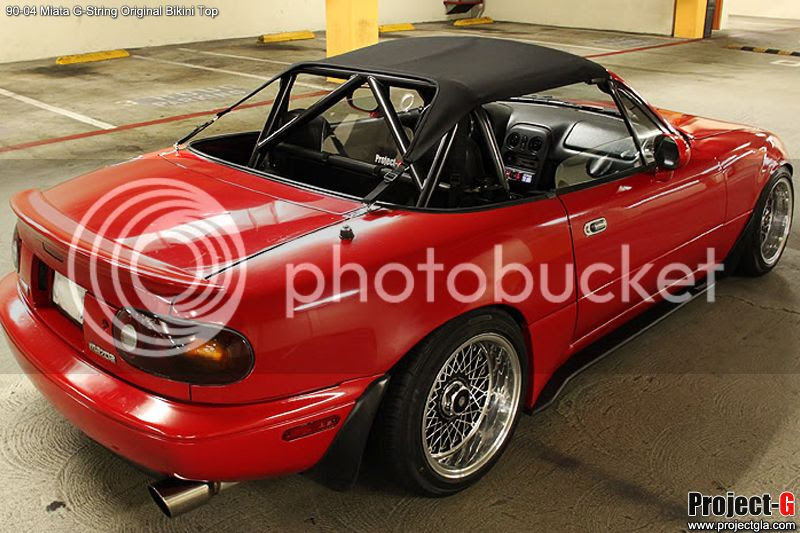 Our Miata came with a hard top, but no soft top.  Many people prefer the hard top, but it requires a certain amount of compromise if you don't have a soft top under it.  You have to commit to your roof situation when you leave the house, which can be a pain.  For example, it would be really nice to have some shade after a long day of driving in Malibu when you're sitting in traffic trying to get home.  Because of situations like that, I decided to do something.

My plan was to make a bikini top like the one above.  It's light, simple, and accomplishes what  I wanted.  I considered buying the one above, which is basically the only option out there, but the price seems a little high at $345, plus the cost of a "factory front bow," which is just the front portion of the soft top that butts up against the windshield surround.

I planned to do something similar to the above, using the front "bow," but I would reuse the original top material, adding straps as necessary.  It would probably look a little rough, so it would match the rest of the car.  After some searching on Craigslist I bought the top below for $70.  There was a big cut in it and the back window was missing, but I was mainly interested in the frame, which is $600 from Mazda.  I located replacement material on Craigslist as well for an additional $70, but I cheaped out and decided to try to work with what I had.  It would have doubled the cost of the project, after all. 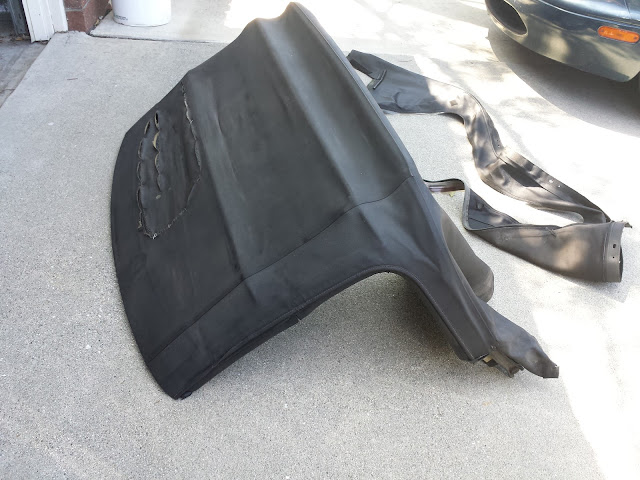 I tricked my wife and mother into repairing the fabric.  We also concluded we should abandon the bikini top concept, mostly because I'm too tall for it to work, but also because the folding mechanism is just too good not to use.  It may be a bit heavier, but who cares. 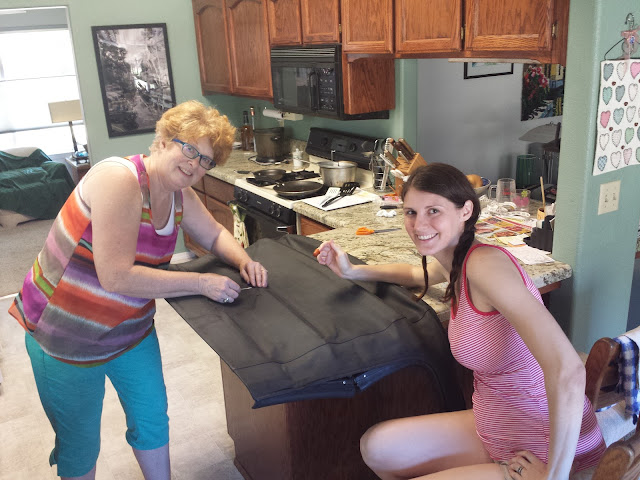 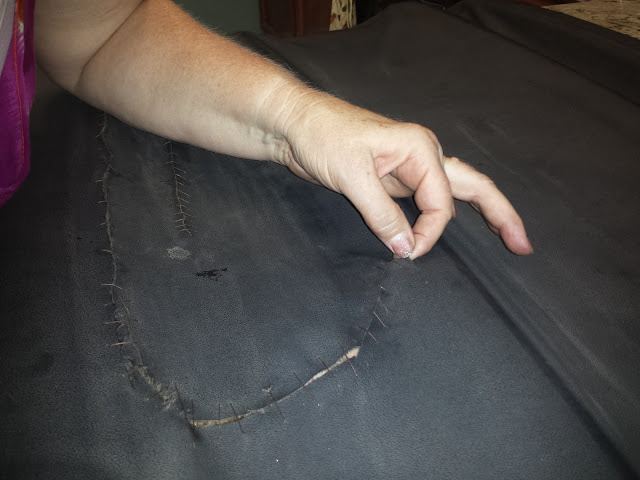 With a few stitches and a lot of hot glue, it looks like it will get the job done. 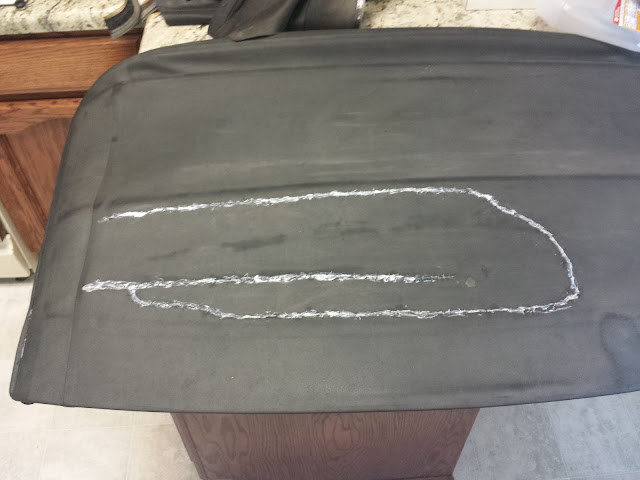 As you can see, we also removed the rear third of the fabric, where the nonexistent window was. 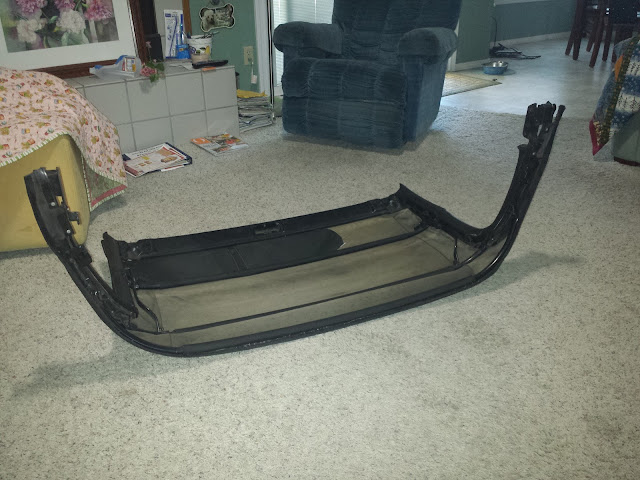 The final step was installing the top on the car.  All that required was three bolts on each side of the car.  Simple...on the passenger side.  Of course, I bought stainless steel hardware. 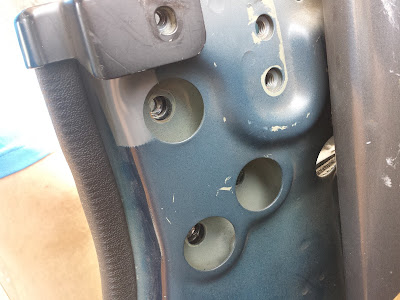 The driver side was much more complicated.  The racing seat was blocking access to the holes, but we eventually got them in, only losing one washer in the process. 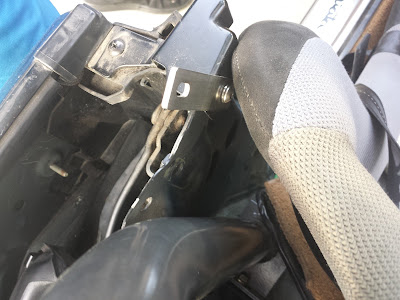 When we bought the car, it came with stainless plates holding the top on.  I cleverly asked for the original latch mechanisms, which saved me at least $80.  I did have to buy the hooks that bolt onto the windshield header.  I found them for $20 on ebay. 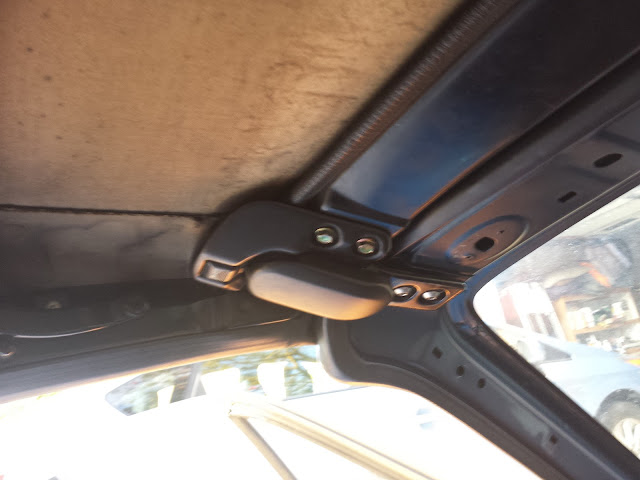 Here's the finished product.  Not bad for less than $100. 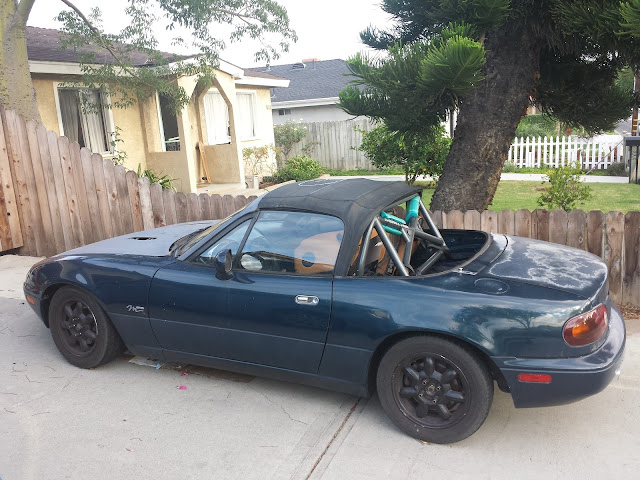 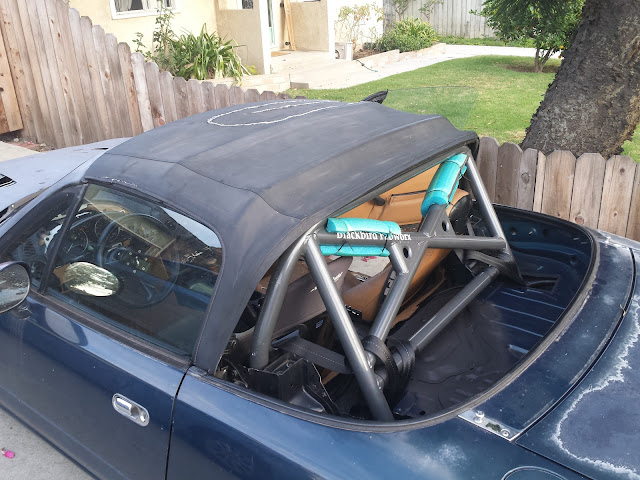 As you can see, it folds up and still lets me use the hard top. 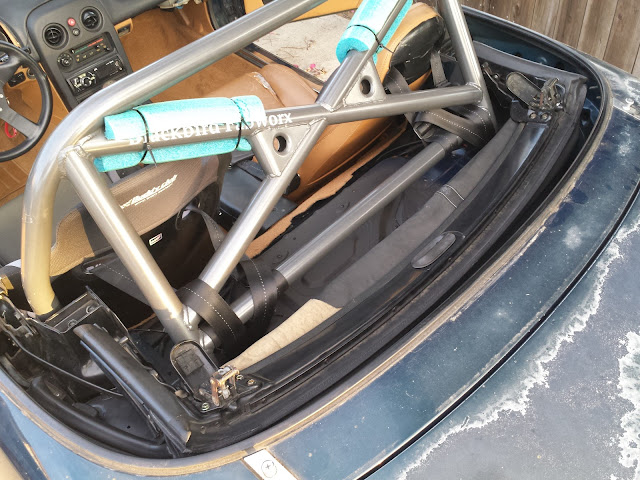 After one drive in Malibu, the new top proved its worth by providing blessed shade on the way home.  Great success!!!
Posted by Andy No comments:
Labels: Car, Miata, spruce, stainless

On our Cancun babymoon, one of the two (?) toilet paper holders had some annoying, and sharp, little plastic bits on them.  I'm guessing they used to hold a metal plate that would hinge down over the TP.  After annoying me for the 300th time (remember we were in Mexico) I decided to fix it.

Guess what I did this month? Turned 30! Yup, I'm officially an adult. I've looked forward to this day for a long time; hey maybe other adults will take me seriously?! (they shouldn't). Anyway, 30 feels amazing and I'm happy to be here. I am 23 weeks now (shout out to Jordan fans!) and Hope has somehow learned karate. Perhaps I watch too many Buffy the Vampire Slayer reruns. Hmm. So, Mexico?
Since my milestone birthday and the midway point of this pregnancy coincided, we decided a vacation (Babymoon) was in order. We hopped on the next plane out to Riviera Cancun and got nice and fat. We spent a week at an adults only (enjoy it while you can right?) all-inclusive resort (Secrets Capri) and it was sensational. It far exceeded our expectations in just about every way. I know with Mexico you have to be careful about both the food and water (especially with pregnancy being a factor) however, this resort knocked those fears out of the park. All of the water on the resort is purified and filtered which means you can have ice and fresh fruit and vegetables and brush your teeth with tap! That was a lifesaver for me, I was comfortable and bacteria free sipping cold beverages by the ocean. Andy took full advantage of the all-inclusive top shelf booze and drank for 3! But you know, responsibly.
They also had tons of restaurant options (including a Japanese Hibachi) that all had absurdly good food. Speaking of the Hibatchi, it was a great show with even better food followed by the best dessert I have ever had in my life. They make a coconut deep fried ice cream, lay it on a raspberry fruit puree and drizzle chocolate lightly over the top. I've had deep fried ice cream before and this killed it, so so so so so good. Even Andy, who doesn't care for sweets devoured that thing in seconds. I want to go there now, and I'm sad I can't. Also, my Dr was none to pleased with my extra vacation/birthday pounds. Whoops! Oh well, she'll get over it...or send me to a dietitian.
In addition to the stellar food and accommodations, they also had one helluva entertainment staff! To stay active we did water aerobics daily with Yoshi; it was silly, fun, active, and because I was in water I was able to participate without fear of upsetting my belly with jostling. I was still very cautious and only did what felt comfortable. In fact, Yoshi modified parts of the routines so that I could still participate! What a guy. We also made a point to walk for 40 minutes each day, most days that was in the gym. I know, in paradise you should be outside, but I needed to have the option to stop easily, not get overheated, stay hydrated and most importantly avoid mosquitoes, so the gym was the best environment.
Since my actual birthday fell in the middle of our trip Andy made a point to have the hotel staff decorate our room with Birthday fun. He had them put a banner on our door, and decorate the interior with a balloon with fun ribbon coming out of it. I was very excited by my special decorations but the icing on the cake was that evening. The hotel just so happened to be hosting a "special performance" by the pool. They had a huge party set up with more incredible food and a spectacular show called "Euphoria." Think of Cirque du Solei but in and above a pool! It was incredible, they had amazing performances on a stage in the water, rings and fabric hung above the pool and if that wasn't enough, they had fire dancers and closed with a guy wearing a water jet pack shooting way up above the pool and back down. And everything had lasers, lights, and music. We managed to score front row seats and we were blown away. After that performance they closed the evening with a live band on the beach. The ocean breeze and the awesome classic rock band was the perfect way to wind down after the acrobatics. What a coincidentally awesome way to celebrate my birthday.
While we were relaxing in this "restaurant" some local wild life decided to join us in hopes of us sharing food. We didn't because PEKEMAS DON'T SHARE FOOD. Oh, and it's really really bad for the wildlife and I love critters too much to risk their health. The resourceful little coati however, sniffed out a biscuit in our neighbor's shorts. So, he stole the shorts, of course, and ran into the bushes. Our neighbors were PTFO at the time so despite our warnings heard nothing. Andy being the stellar citizen of the world he is, chased down the little guy to retrieve the shorts. One little problem...these little cuties seem very sweet so Andy waited until he set the shorts down and reached for them. The little guy had other plans and like lightning jumped over and swatted Andy with his super sharp claws. Andy was not deterred and enlisted the help of resort staff to retrieve the shorts. And while the little critter wasn't interested in being our friend the people who's shorts were stolen were our new resort friends. Win. Plus, I laughed so hard at Andy chasing this thing down I could barely breathe.


Even more hilarious and awesome is Andy in full blown protective Daddy mode. I was a little tired after our first leg of travels and even though he had kindly taken on my luggage I managed to stumble and fall going up some stairs (Yes, UP). I caught myself on the hand rail and my other hand on the stair with no hitting of the bump but it scared the crap out of Andy. He insisted I don't take anymore stairs until I am "no longer pregnant and Hope is like 9" his words. I understood his concern but I was deeply amused by his over reaction.

He has also taken it upon himself to bring me water and chairs when he thinks I need a break. And he is unbelievably sweet about buckling my sandals and picking things up for me. I gladly accept his thoughtful gestures and I can't wait to see him helping Hope put her shoes on and tying her hair back. I think Andy was meant to have a baby girl, I really do.

Even though Mexico was so spectacular, we are very happy to be home. Nothing compares to the life we have built together and most importantly nothing can ever beat sleeping in your own bed. Am I right? Let's finish this post with pictures of this unbelievable lagoon where the river meets the ocean just a short walk from our resort beach. 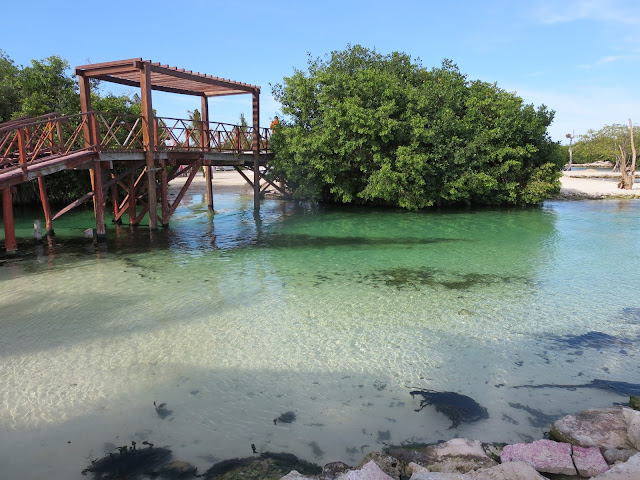 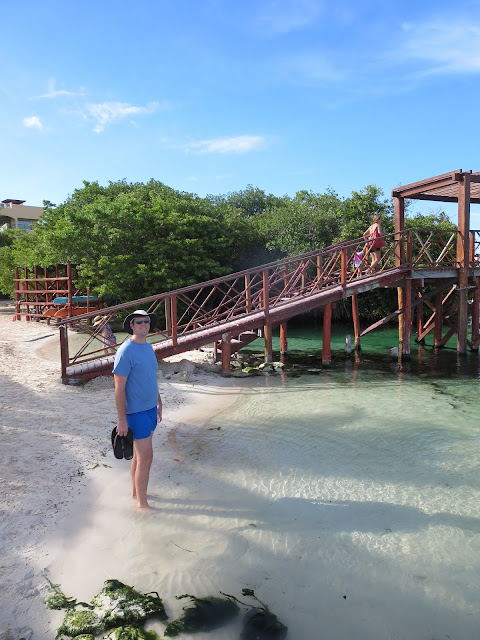 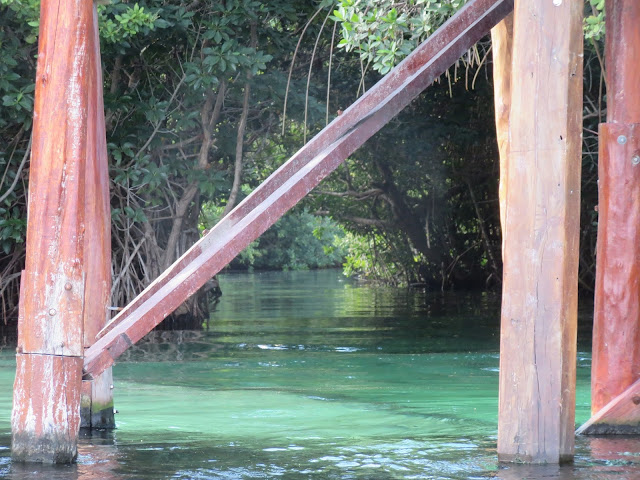 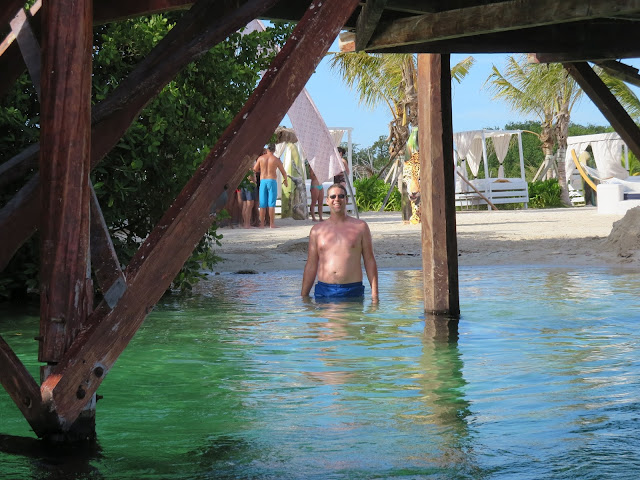 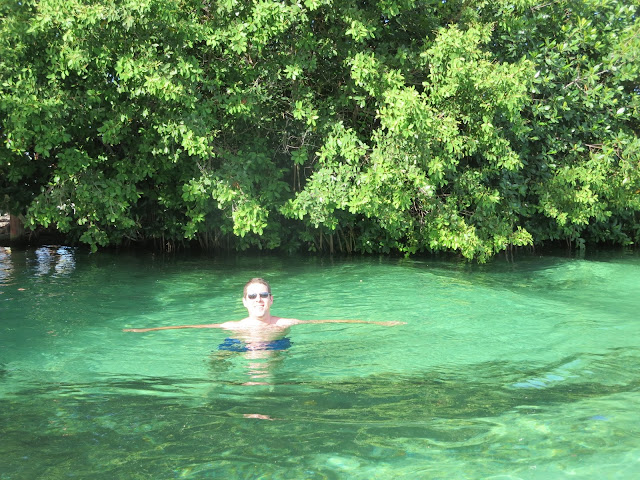 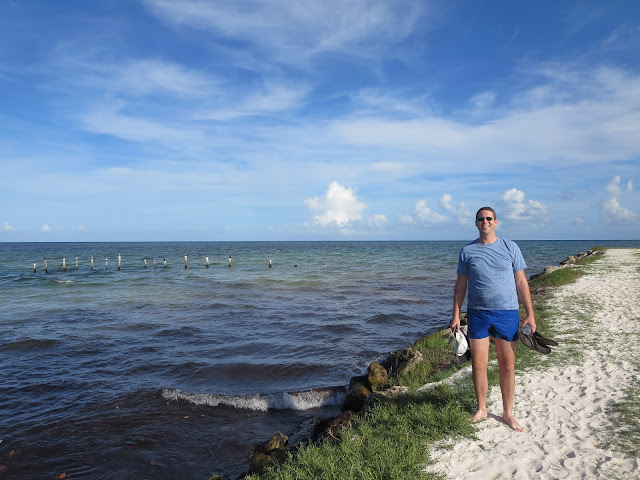 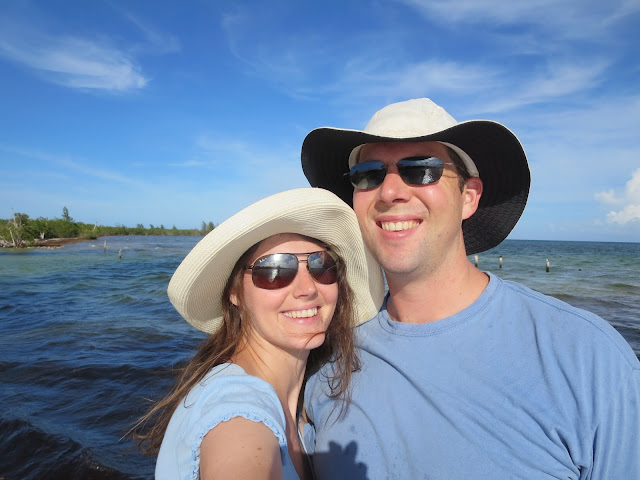 If you haven't been to Cancun for whatever reason you should go. That is all.
Posted by Unknown No comments:
Labels: Baby, hiney, satisfaction 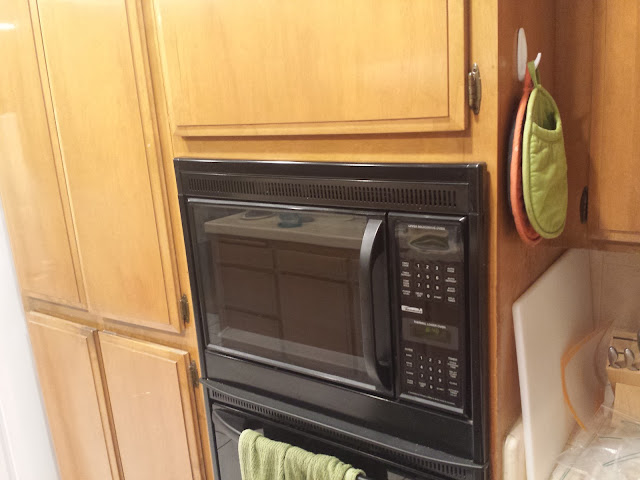 After storing our hot pads across the kitchen from the oven in a bottom drawer for years, I had an epiphany one day after seeing a towel hanging at my parents' house--we should hang our hot pads next to the oven, just like Chrissy's grandmother does.
Chrissy took the initiative and bought then installed an adhesive backed hook on the cabinet next to the oven.  It's an ideal location since they are out of sight in the corner.  Now we just need to remember they are there and stop looking in that drawer.
Posted by Andy No comments:
Labels: Casa, satisfaction
Newer Posts Older Posts Home
Subscribe to: Posts (Atom)