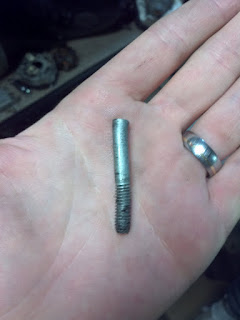 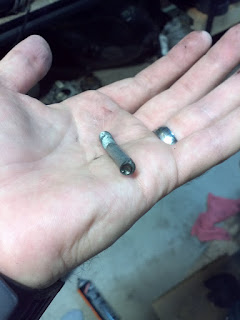 Last time, I stopped after loosening the bolt that holds the alternator rotor to the crankshaft.  That's not the end of the story for removing it.
It turns out the rotor is wedged onto a taper on the end of the crankshaft, so you have to forcibly pull it off to remove it.  The way you do that is by removing the bolt, inserting a small rod in the hole, then re-installing the bolt.  When you tighten the bolt, the end of it presses against the rod, which presses against the crank and the rotor is forced off.
That is all good in theory, but it is pretty stressful to actually do that on your own bike.  I had no idea what kind of unholy bonding had taken place since this thing was last taken apart (1977?).  I get pretty nervous when it seems like harm could come to vital components like the crankshaft.  Luckily that particular component is a piece of hardened steel, so it should hold up pretty well.

Anyway, I cut the head off the bolt in the above photos (as the service manual recommends) and slipped it into the hole.  I searched in vain for my tub of grease; it seems to have vanished.  I eventually decided to lube the threads of the bolt with old motor oil.  I threaded the bolt in and started tightening.  And nothing happened.  I started getting nervous.  I put a little more torque on it and still nothing.  I backed out the bolt and it looked fine.
I re-lubed and tried again.  This time I put quite a bit of torque on it and started getting the sinking feeling that something was yielding.  Back the bolt out again.  Looks fine.
I went for it again and after cranking on it pretty hard, the rotor finally popped off.  I pulled out my little rod and discovered there definitely was some yielding going on.  It developed a hell of a dimple where the bolt was pressing on it, not to mention a subtle S curve.  That thing was straight when I put it in there.

So, everything came out fine in the end.  Big sigh of relief 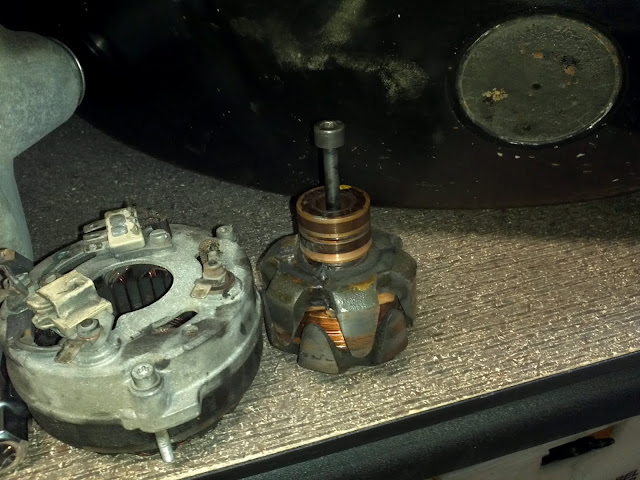