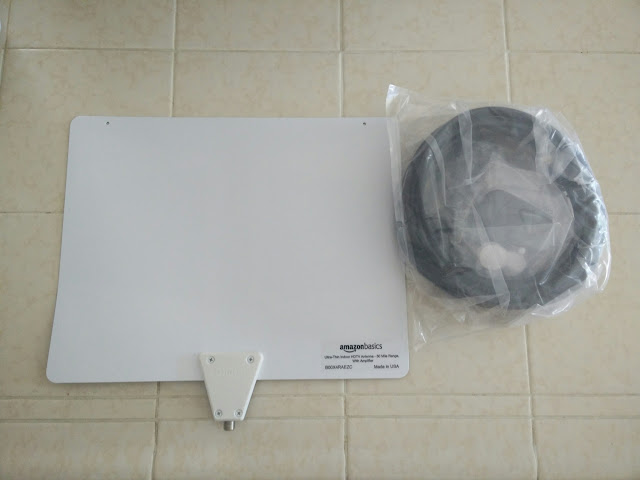 After the initial success of our attic antenna, reception has become worse and worse. I finally got tired of it and ordered a flat antenna from Amazon. The model we got is "amplified" to boost the signal, and it is working great.

I think this thing works better than our big antenna because it was designed to pick up digital signals and I was able to position it further back in the attic where the neighbor's house won't block the signal so much. 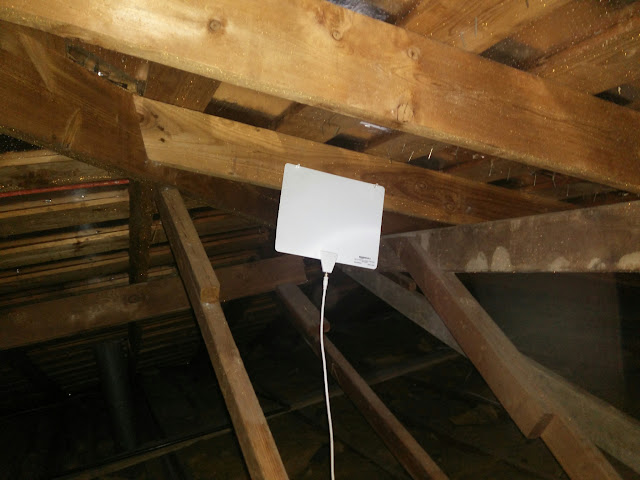 A Change for Our Change 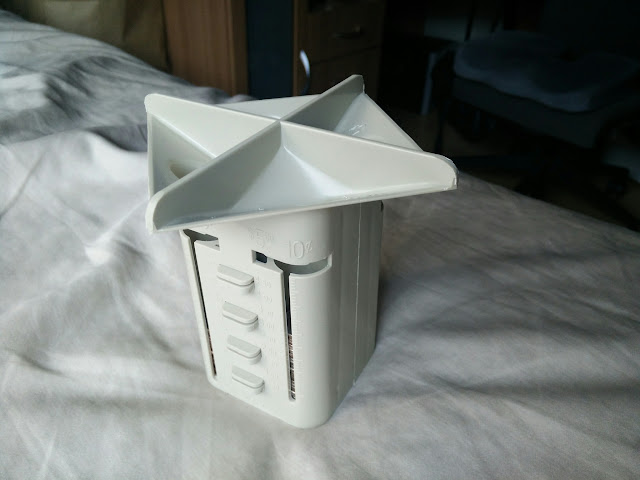 We have been dumping our spare change into a jar for years, and every time it fills up and we have to count it all, we are miserable, so I decided to buy a segregated coin holder. I put way too much thought into which one to get, but finally settled on this one because it has the smallest footprint.
It is working out really well, but there was one problem. In dim lighting, it was hard to tell which slot was for which coin since the labels were the same color as the rest of the unit. 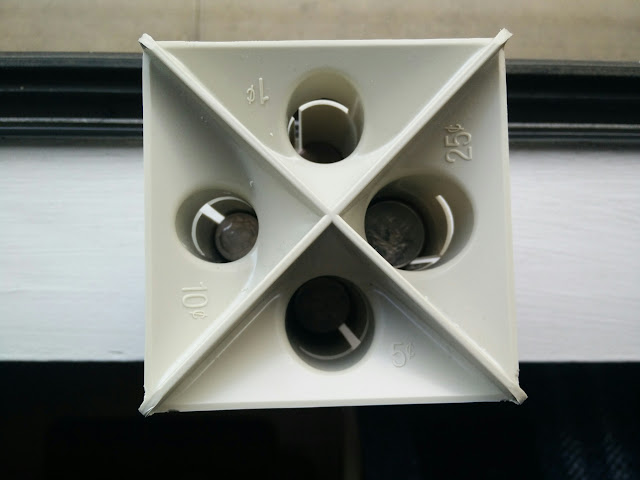 I solved the problem in no time using a Sharpie to highlight the raised labels. Our coin sorting has never been so efficient. 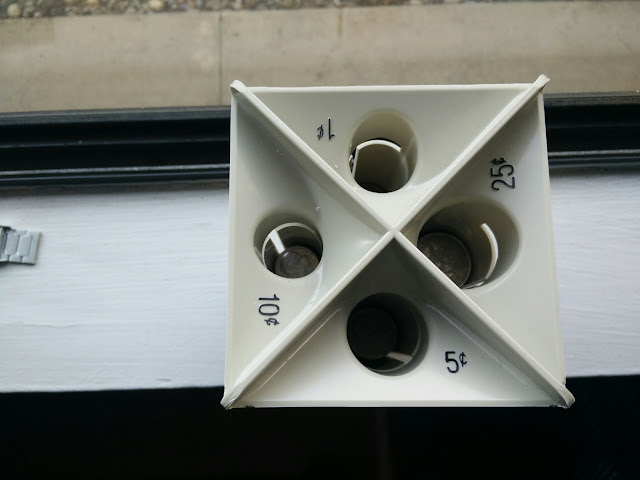 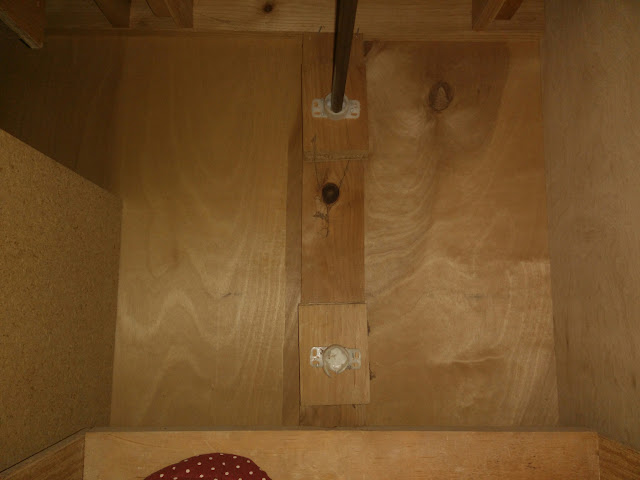 The other day we walked into our kitchen and discovered one of our drawers was askew. It turned out the plastic piece that held the slide rail broke.
The slides on our drawers were pretty much the worst thing in the world, so it was inevitable that this would happen. I've wanted to replace all the slides for some time, but have never gotten around to researching what is available these days and following through. Now I had to do something, and it involved being in this position for extended periods:
Choosing the new slides was easy with the help of Rockler Woodworking's website on the topic. With the geometry of our drawers, the only choice was to go with a center-mount slide. I could have used a similar slide to what we had, but I desperately wanted something better, so I went with Rockler's ball bearing unit, which has a lifetime warranty. By the way, Rockler had a much better selection of drawer slides than Home Depot or Lowe's, so if you ever need drawer slides and you are near a Rockler, go there first. Surprisingly, I think the prices were lower at Rockler as well.

Now that I had replacement slides, I was ready to get to work. The first step was uninstalling the old hardware. 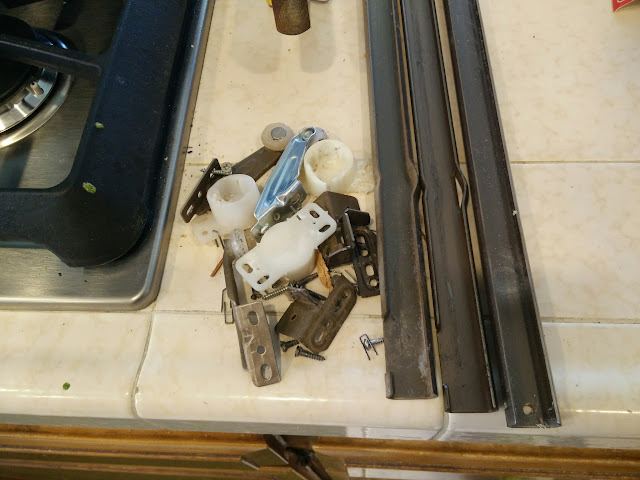 Next I installed the rear brackets for the new slides. This wasn't easy because they have to be positioned so the slide will be level and it is incredibly awkward to reach them, but I got them eventually. 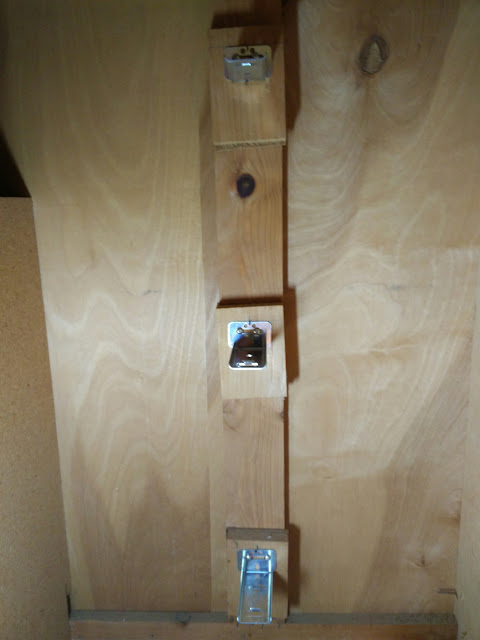 Then the cabinet half of the slides were installed. 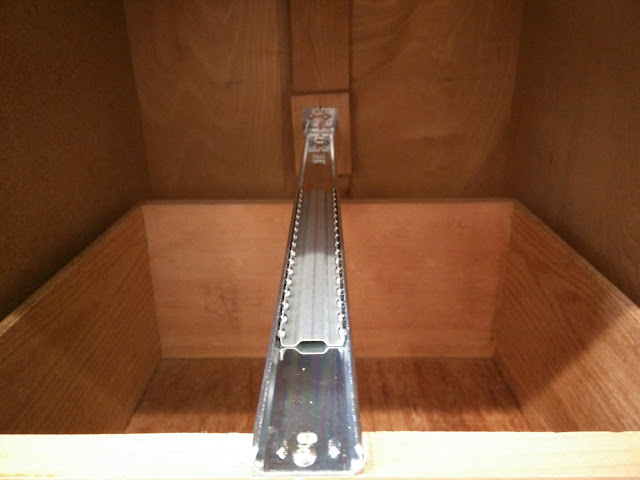 Before installing the drawer half of the slide, I had to do some repair to the drawers. Our old slides rest all the weight of the drawer on the sides, which run along wheels when they are opened and closed. After years of use, the particle board was starting to disintegrate. 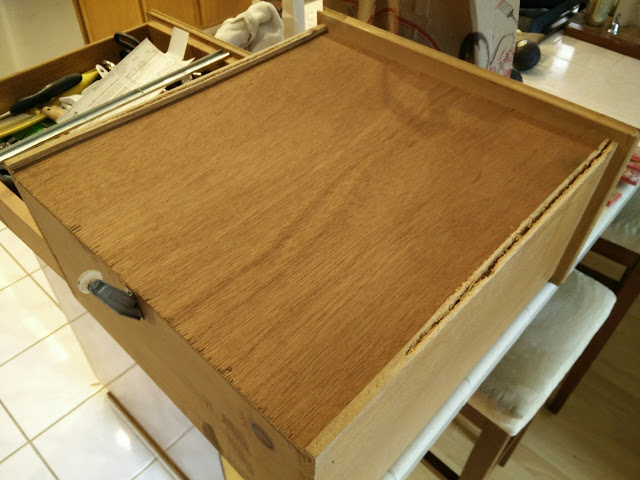 I applied a generous helping of wood glue and things were much more solid afterward. I would probably have done a more extensive repair, but the new slides carry the weight in the center, so the sides won't have nearly as much wear on them anymore. 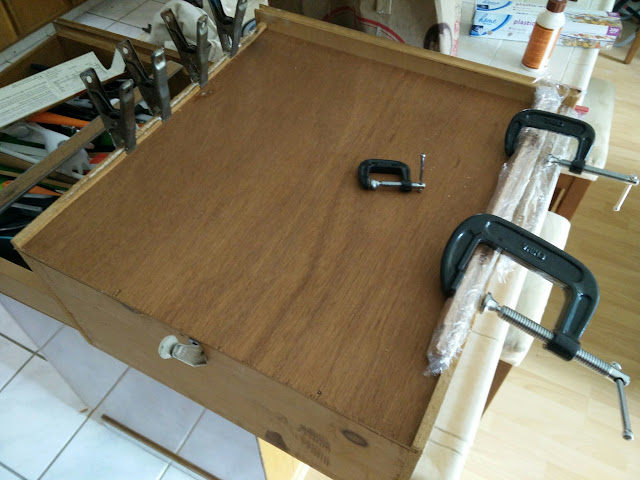 The slides didn't quite fit our drawers, so I had to customize them with an additional hole. 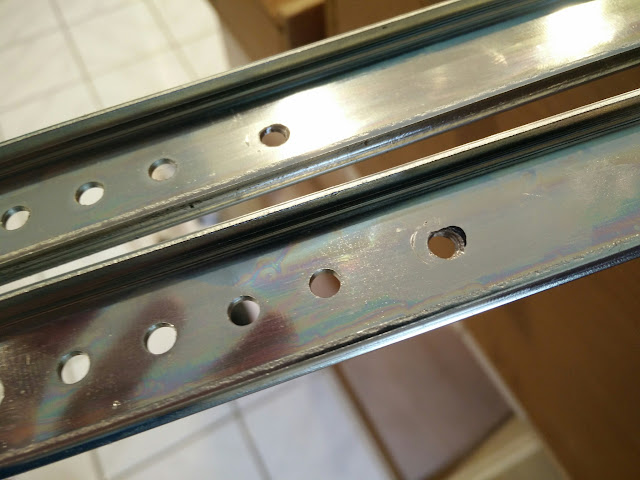 After that, I screwed on the slide and did a test fit. It didn't go well.
The geometry of the drawer wasn't right, so the edges hit the cabinet. I had to do something. 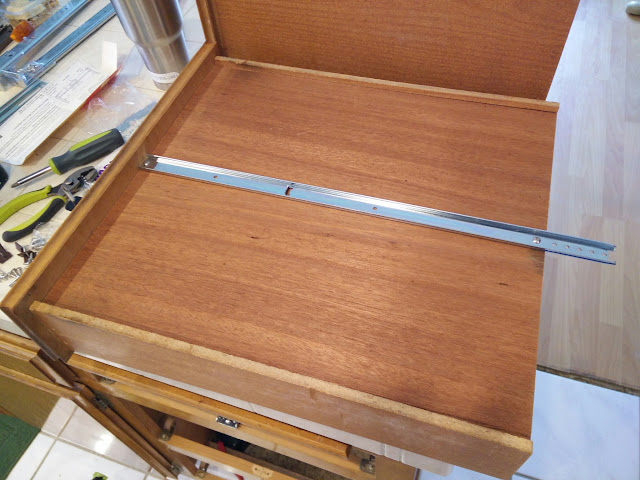 The solution was to cut shims to go under the slides. 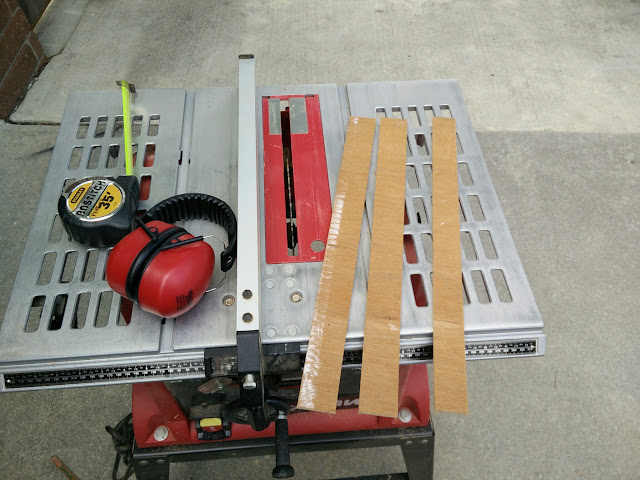 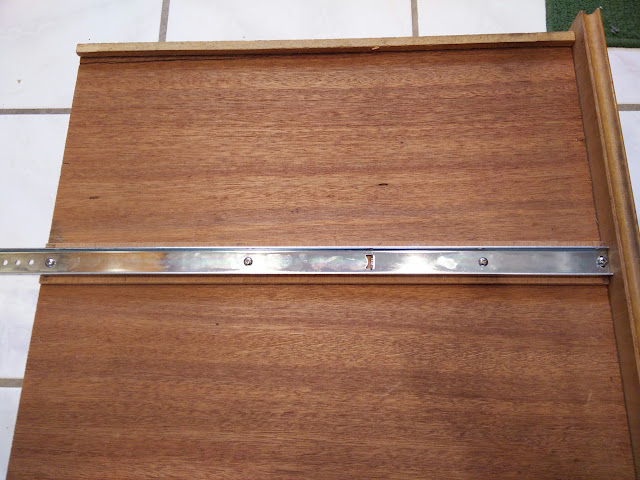 With the shims in place, the drawers fit perfectly, but they were a little stiff and there was an odd clunk halfway through the travel. It turned out one of the screw heads was hitting another part of the slide, so I had to grind down a little tab to increase clearance. The stiffness was fixed with a quick application of grease to the bearings.
If all goes as planned, I should never have to mess with these drawers again. 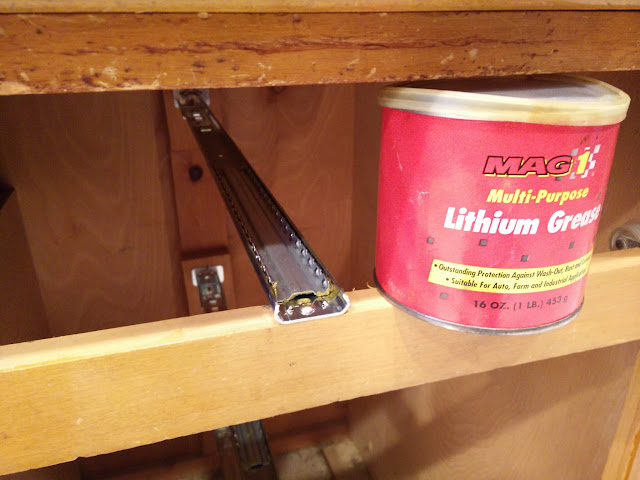 Posted by Andy No comments:
Labels: Casa, stainless, Stuff I don't like doing 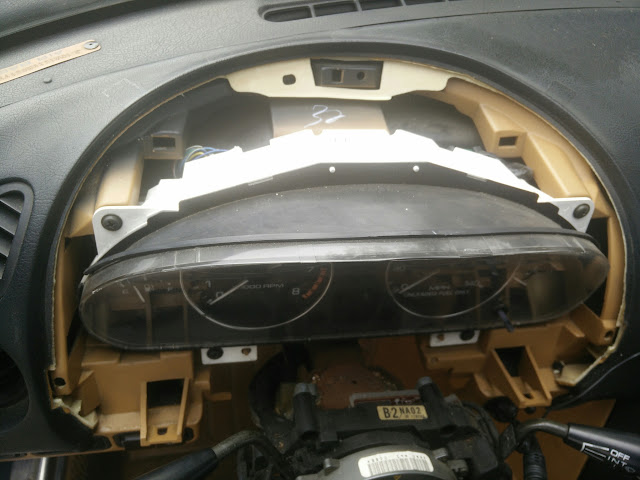 One of the first things I did with the Miata was tape the cluster shroud in place. That tape eventually had enough and became ineffective, so I decided to just remove the shroud, saving about a pound in the process. The only problem was the bright white and tan plastic that was underneath, right in the driver's line of sight. 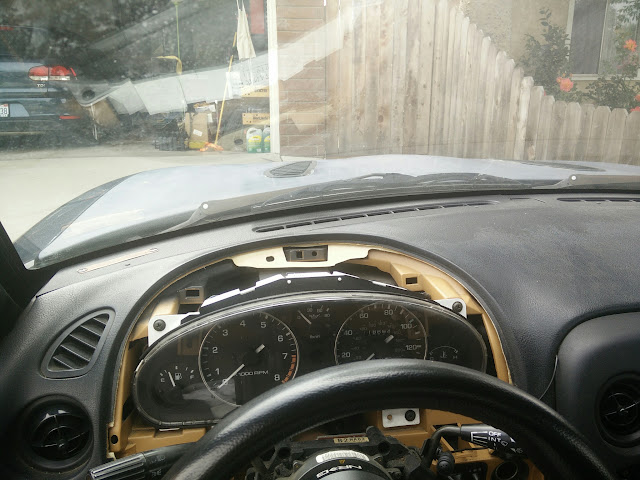 I decided I was tired of looking at it, so out came the masking tape. 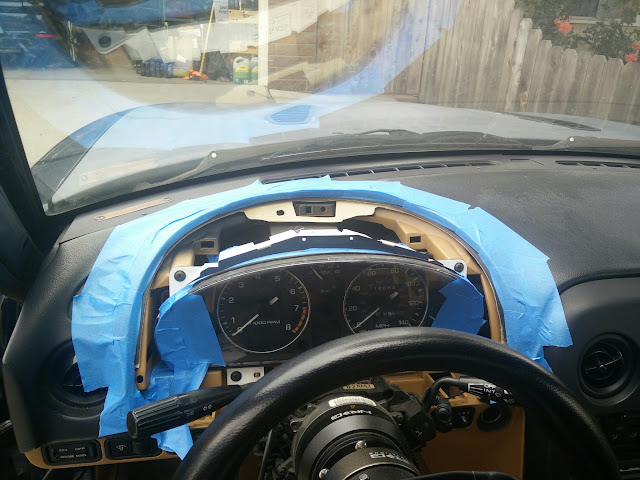 A little flat black paint made things much less distracting. 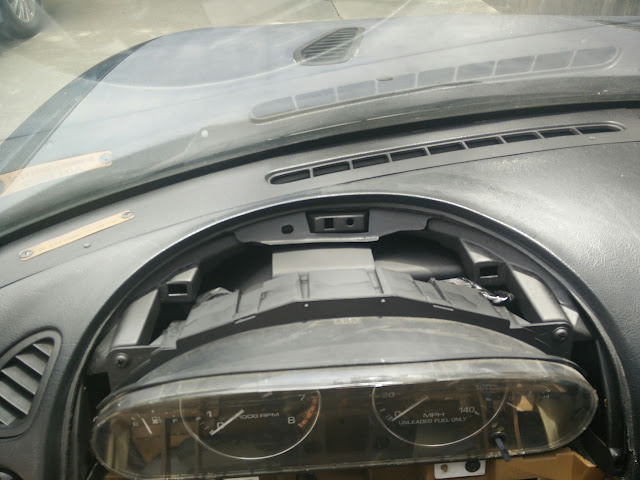 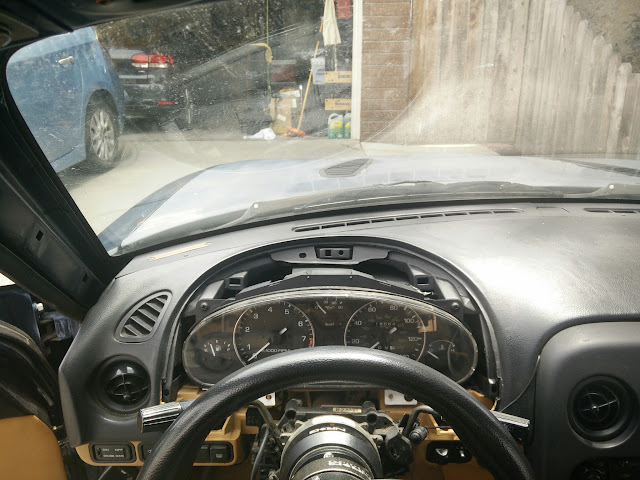