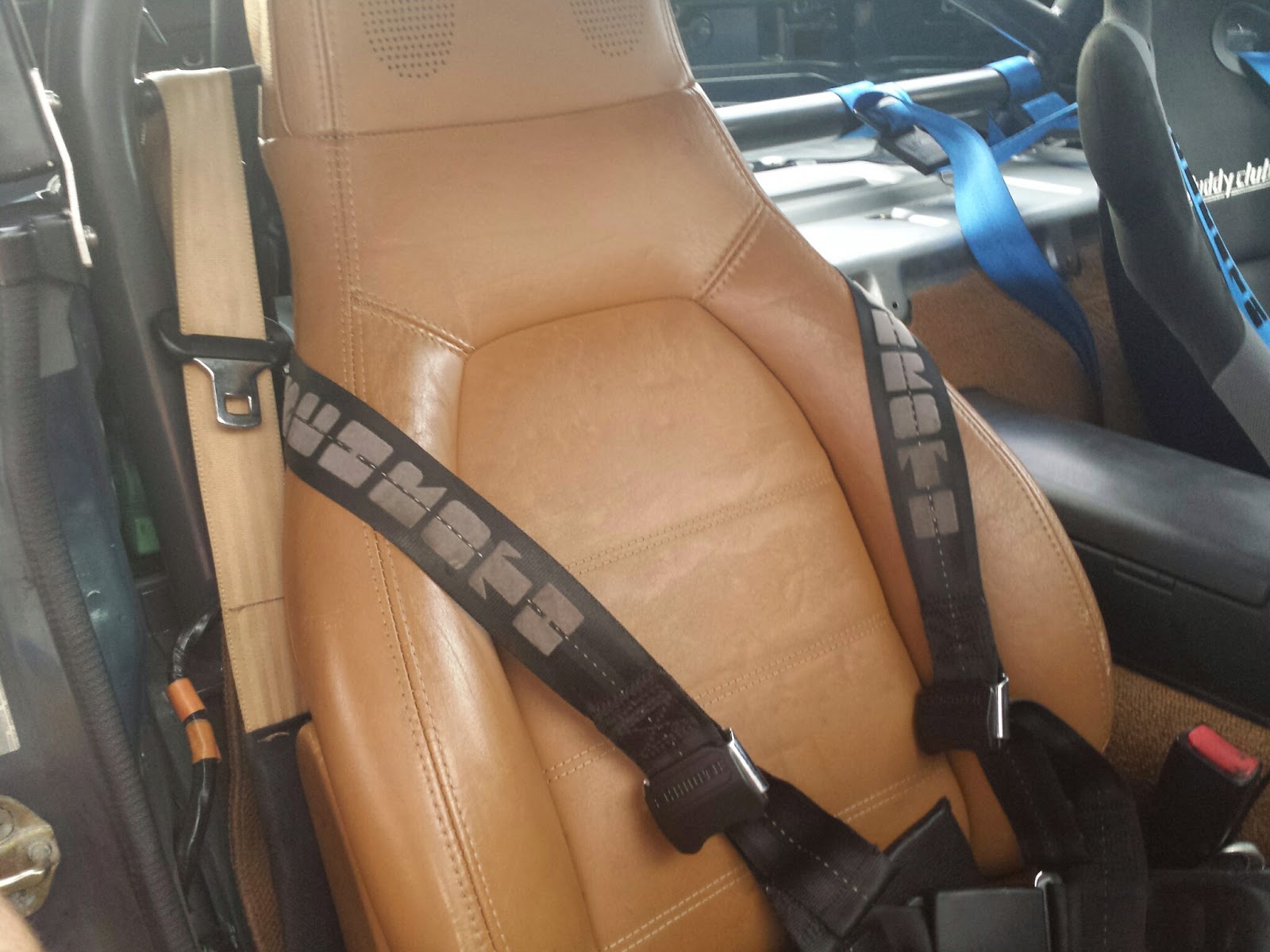 Chrissy told me she was tired of hitting her head on the roof whenever we hit big bumps in the Miata, so she wanted four-point harness for the passenger seat, like the one on the driver side.  I started looking for a racing seat and a harness.  I got super lucky with the harness, and found a fellow on Craigslist selling a pair of harnesses nearby in Redondo Beach.  I only needed one, but his price for two was what I expected to pay for one.  Plus, they were black, and it would be nice to have a matching set in the Miata.  I was never a big fan of the blue one the car came with.

I planned to wait until I found a racing seat for sufficiently little money, but I decided to see how the harness felt going around the stock seat.  It seemed reasonable, so I decided to commit.  I unbolted the seat and started removing the stock seat belt components.  This big bar was first to go.  It tied the buckle into a solid point on the chassis. 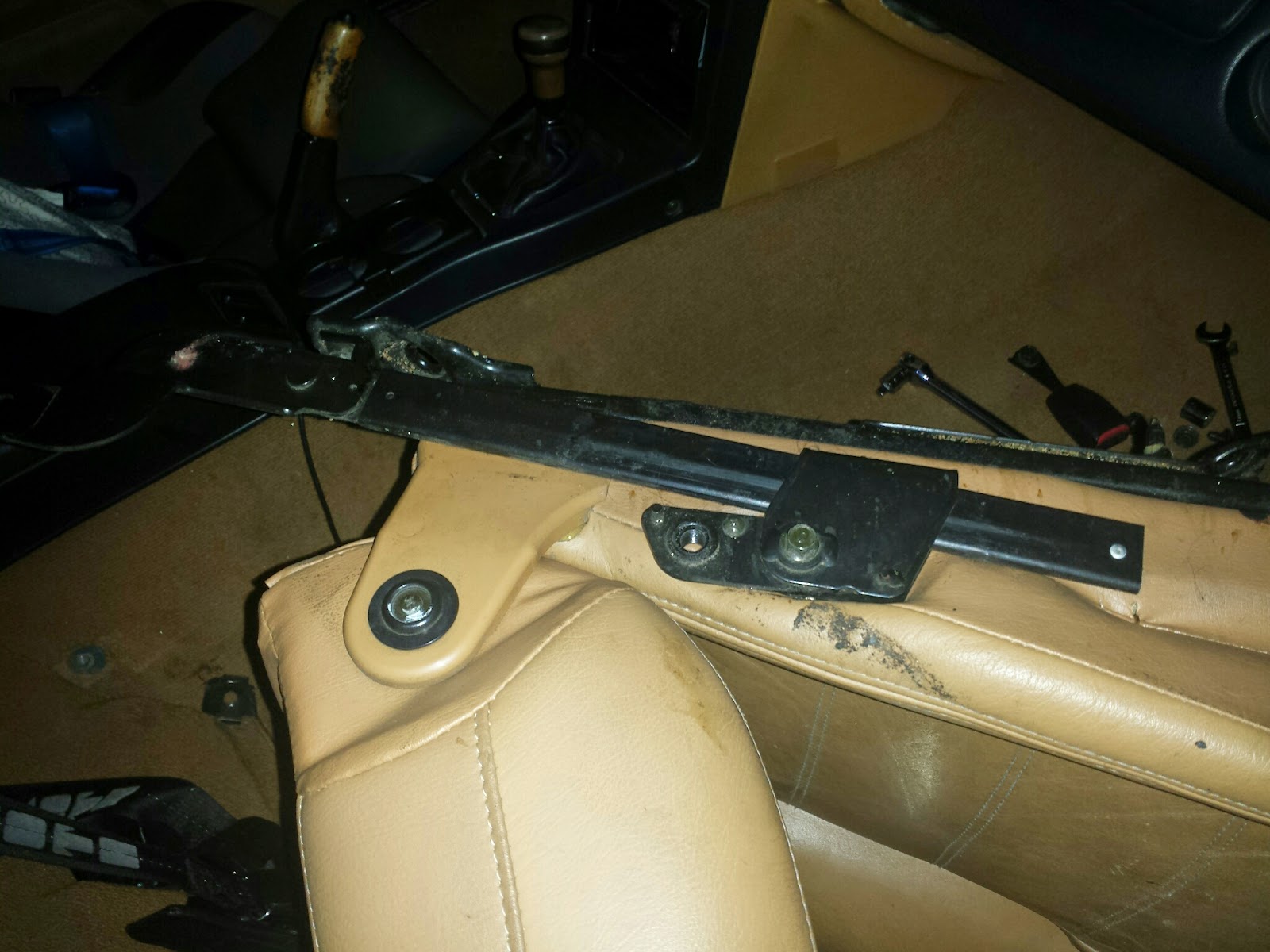 With just two bolts on the bottom and some appropriate wrapping around the roll bar, the harness was installed. 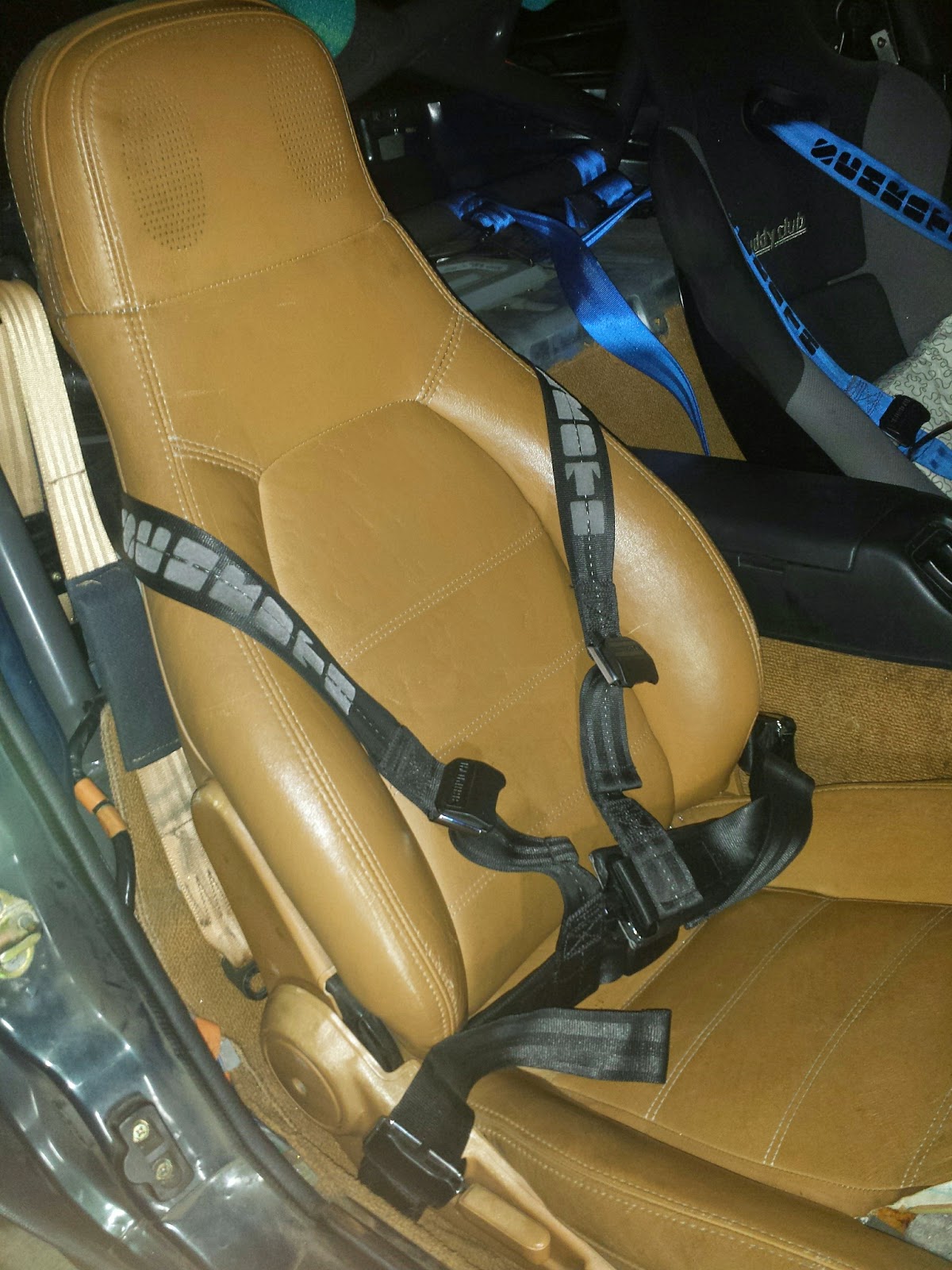 The stock seat belt was proving a little difficult to remove, so this is all I was able to get out the first day. 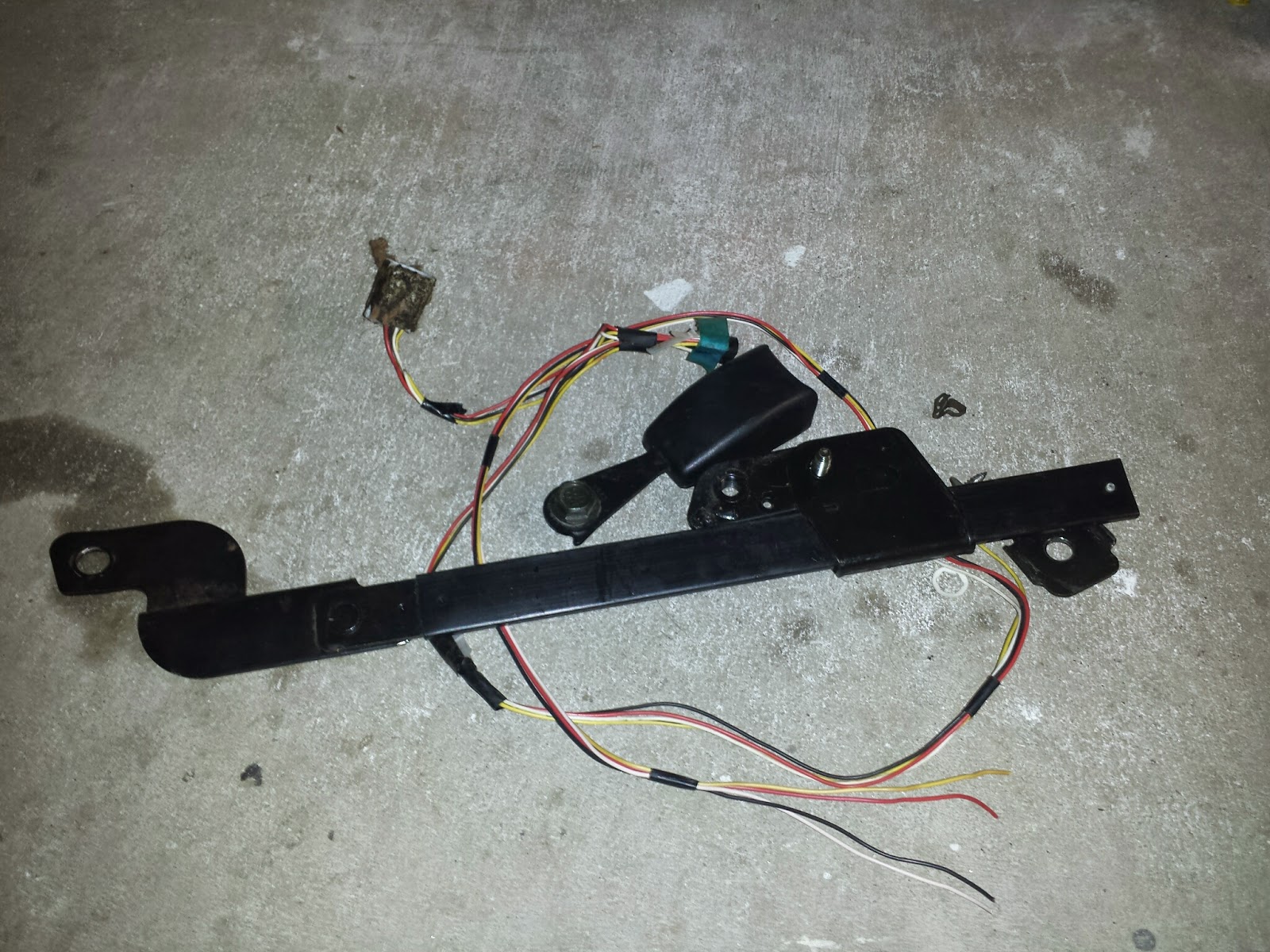 One of the problems I was having was with this bolt.  On the driver side, it appeared it screwed into a captive nut, but on this side, it just spun, and there was absolutely no way to hold the nut on the other end.  I messed with it for quite a while, but finally gave up. 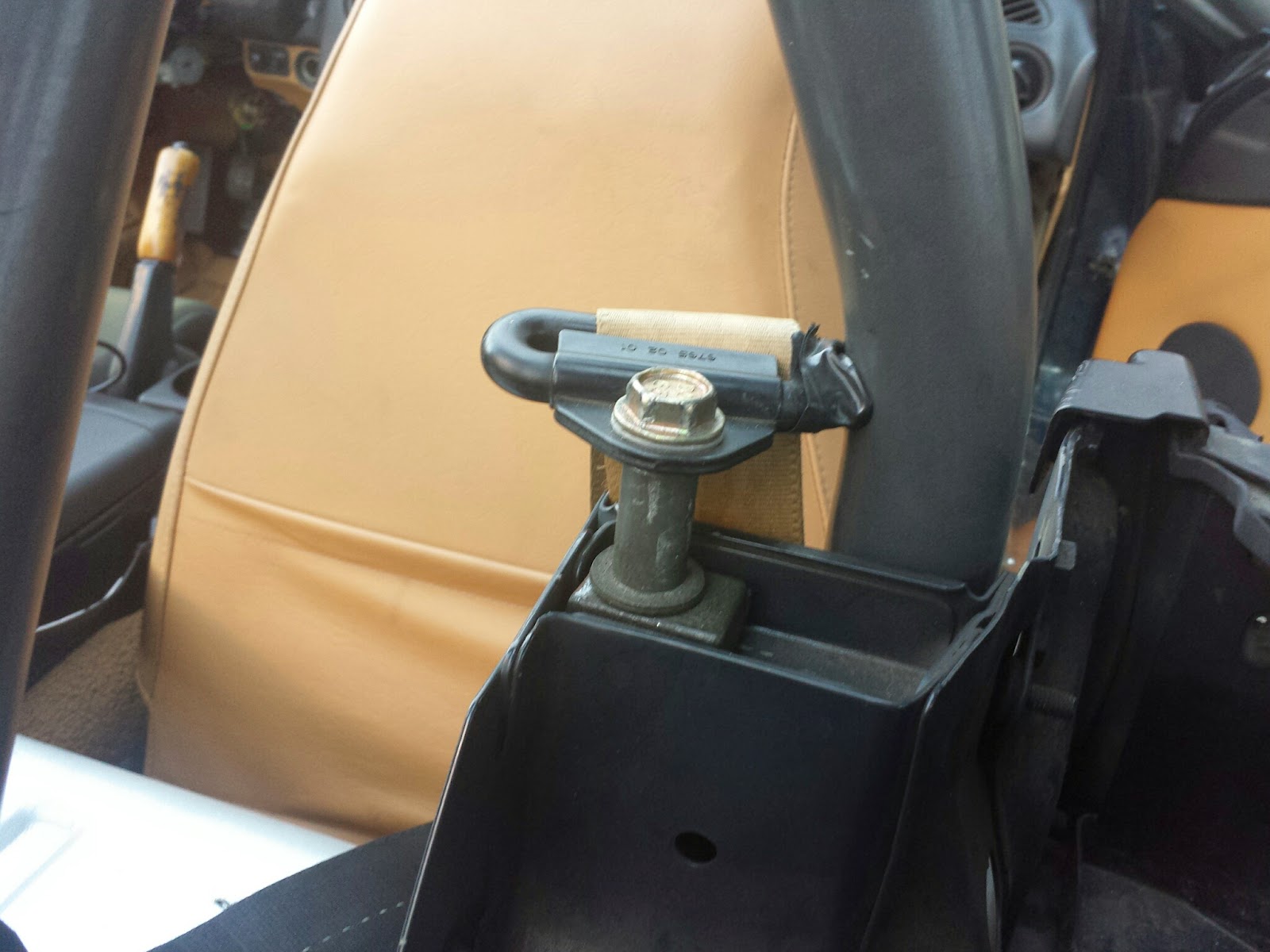 My other problem was the retractor was trapped in its little nook by the roll bar.  I didn't want to unbolt the roll bar, so I had to get creative. 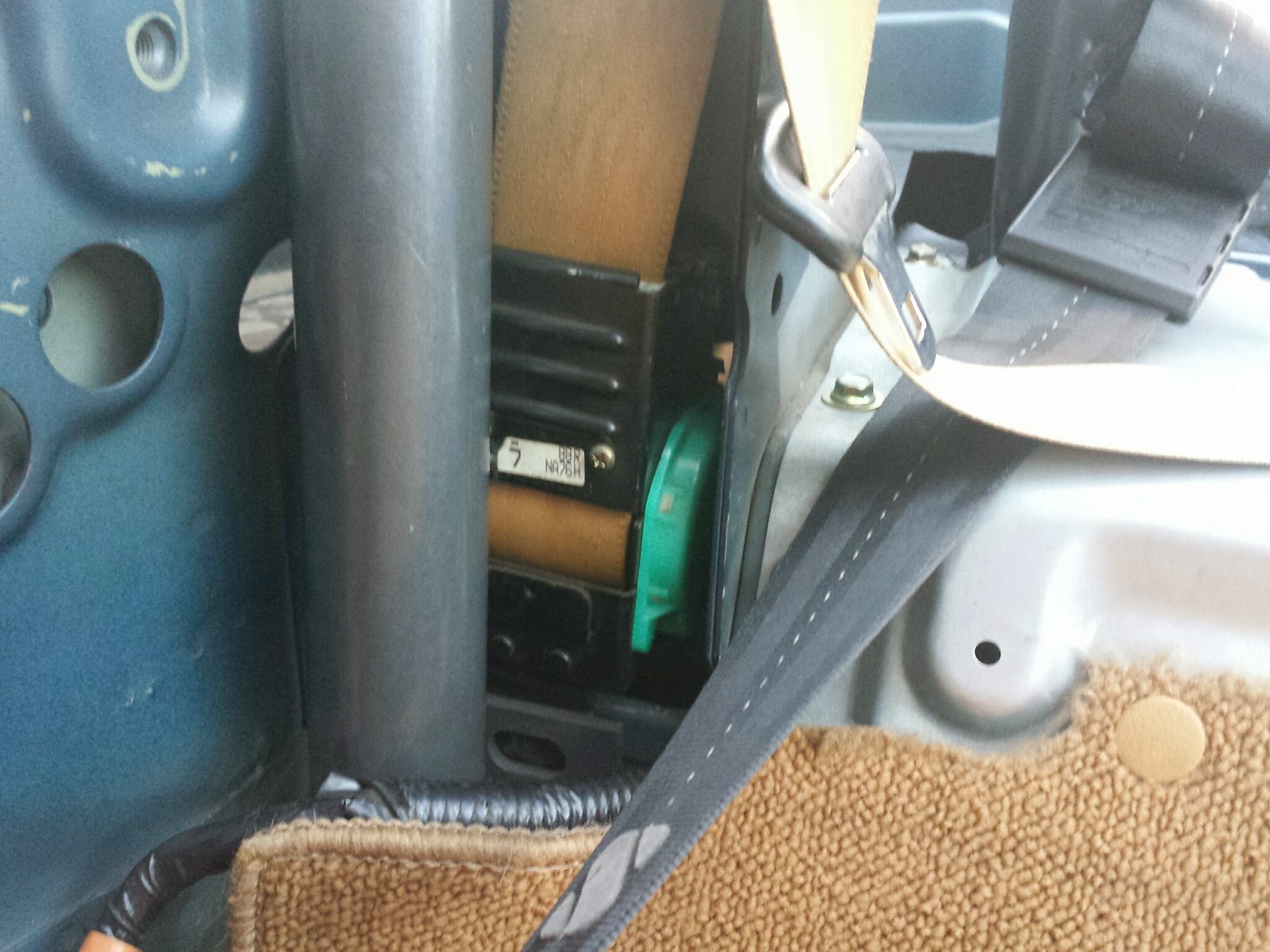 The answer to both problems ended up being the same:  Sawzall. 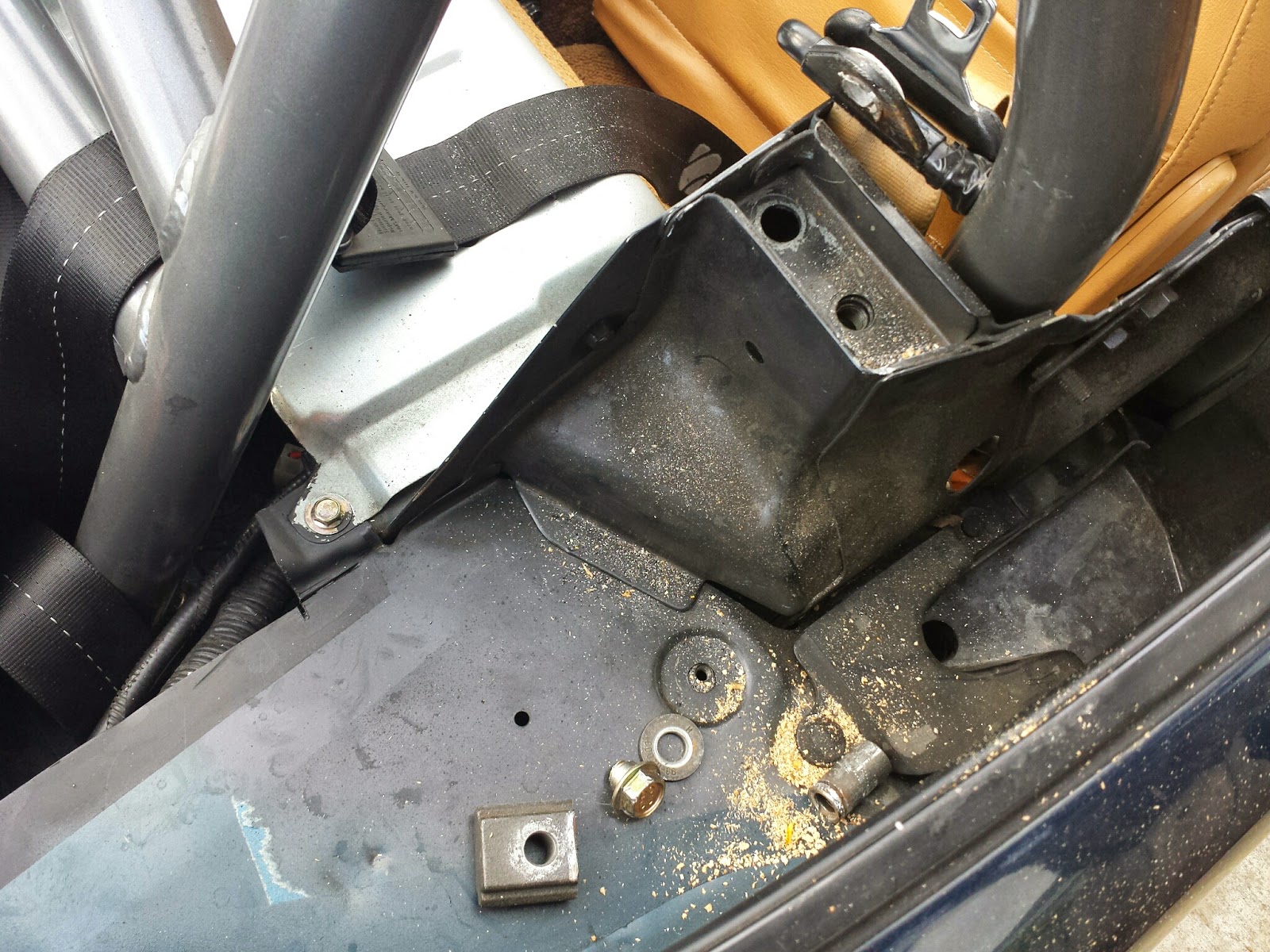 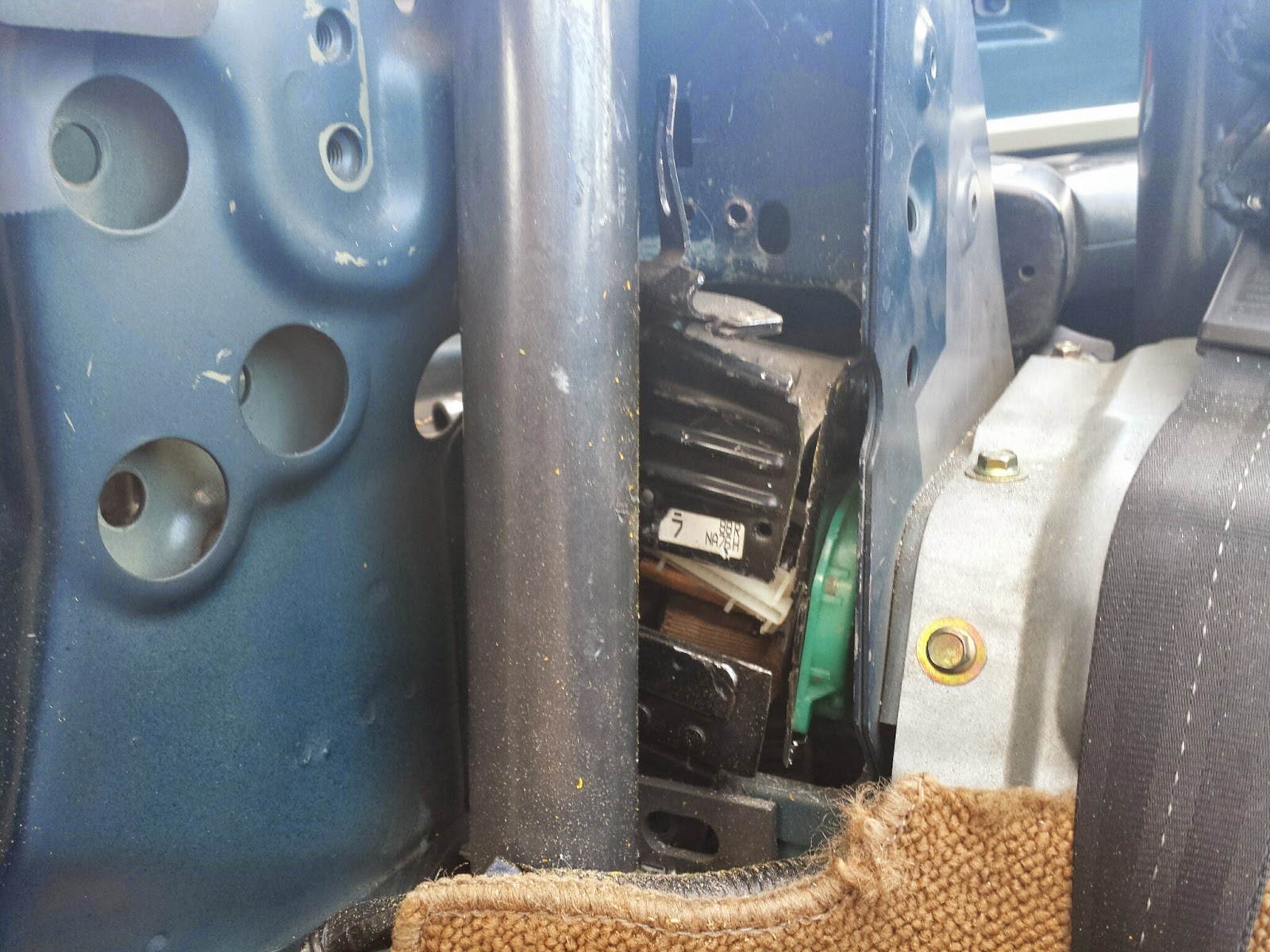 Look how clean it is now! 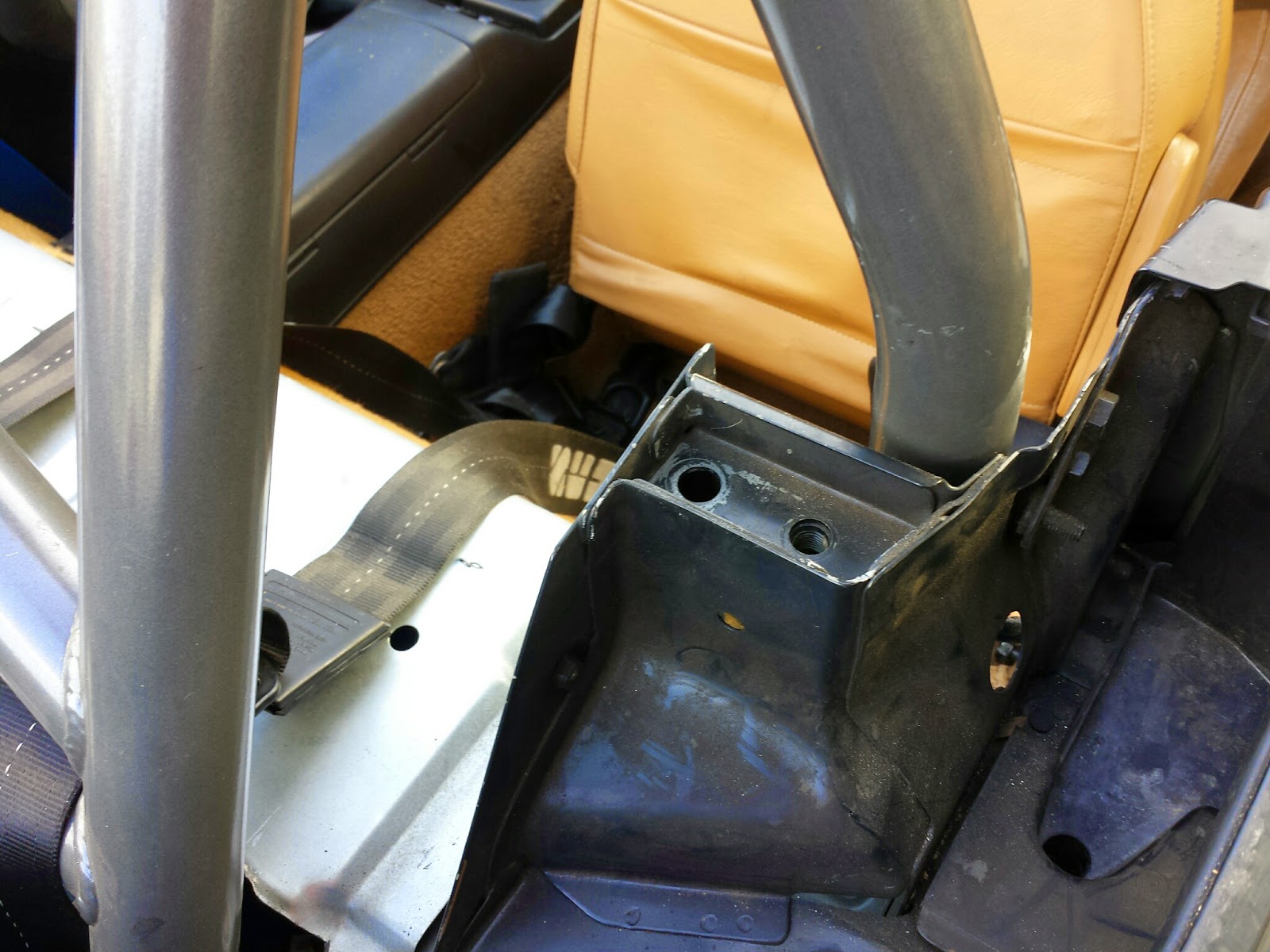 There was a significant amount of struggling to get the retractor out, but I got it.  The roll bar got a little scuffed up, but it will still do its job. 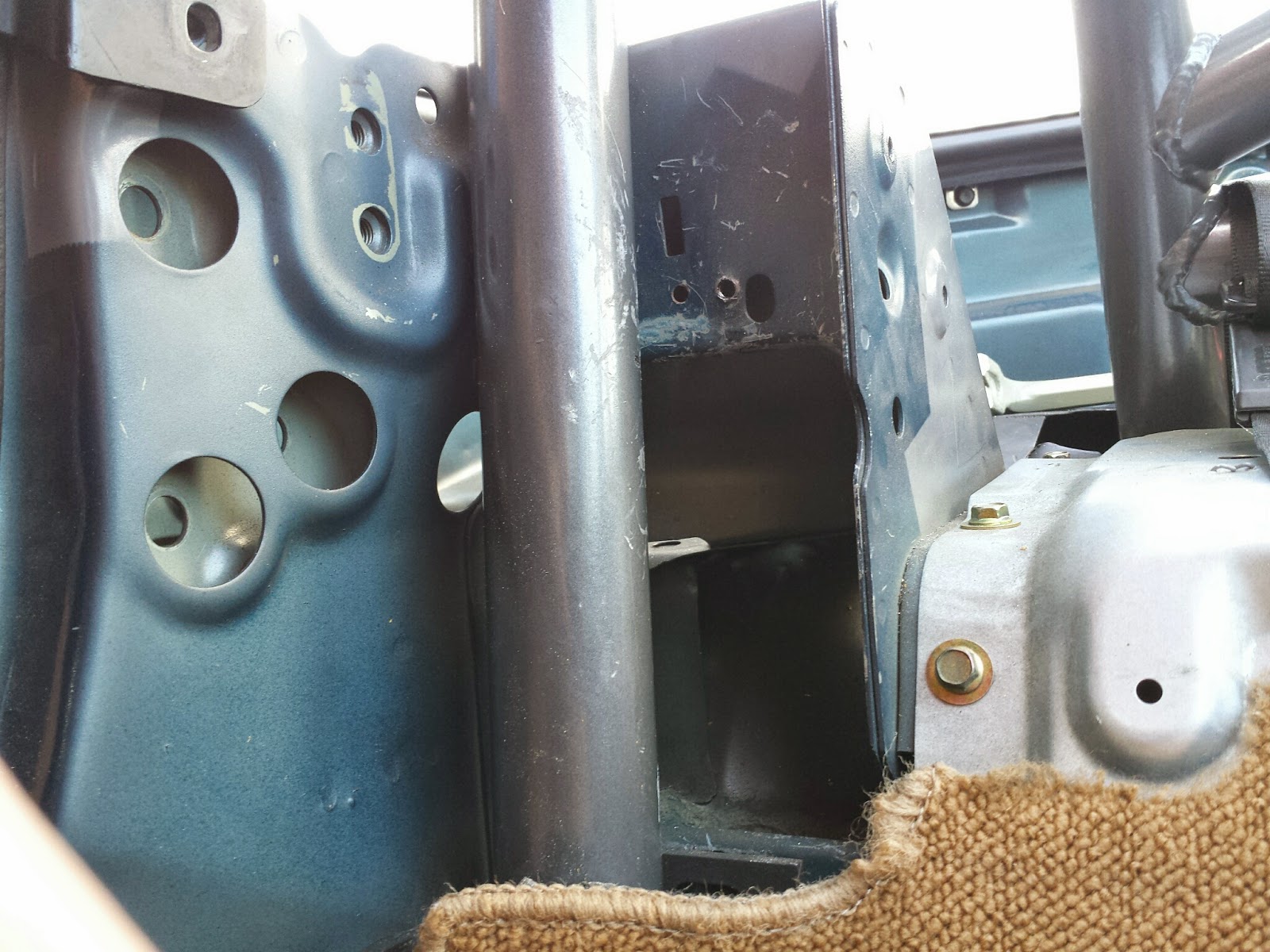 Here's the rest of what came out. 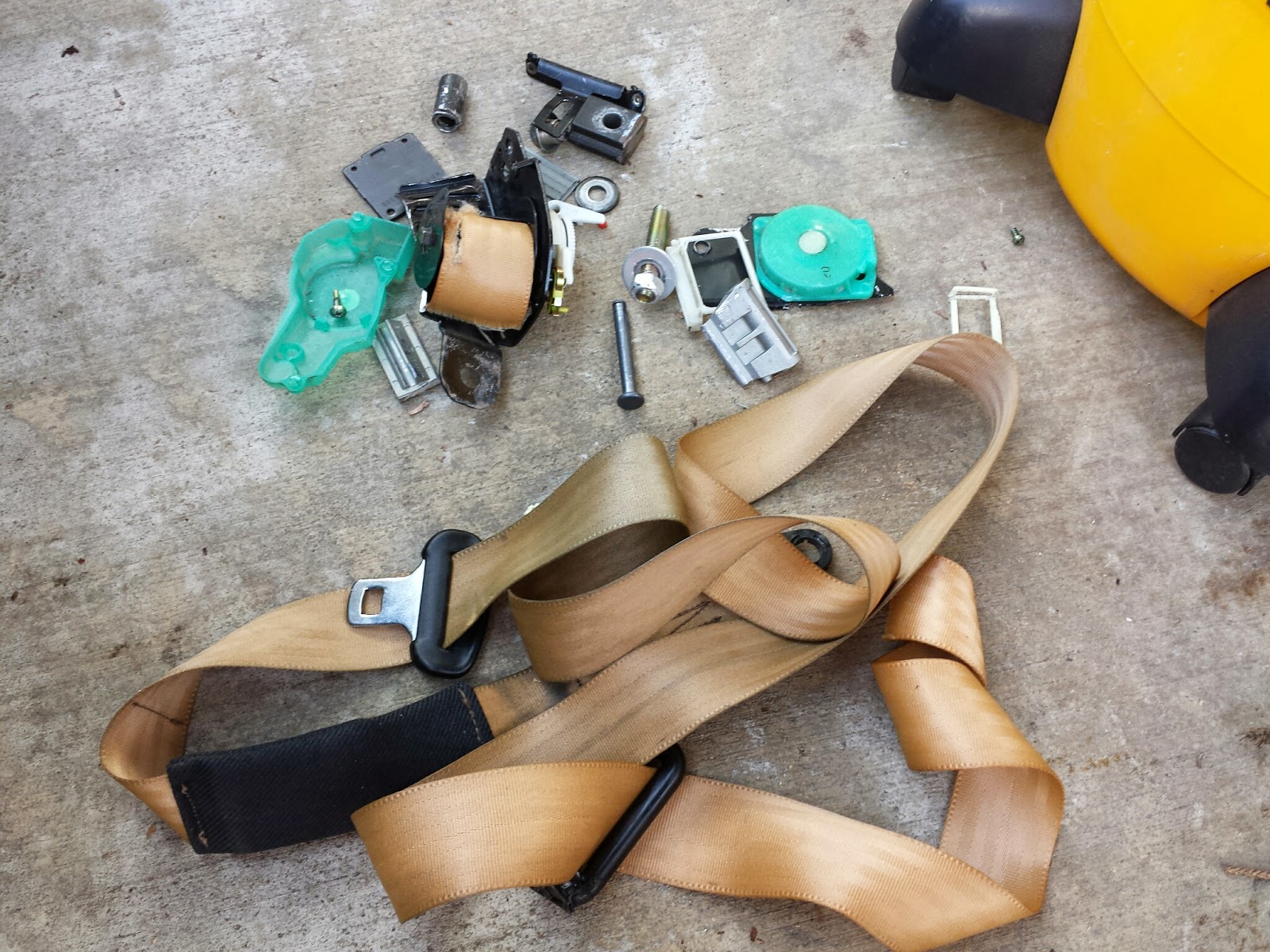 Normally, it doesn't take this many tools to remove a seat belt. 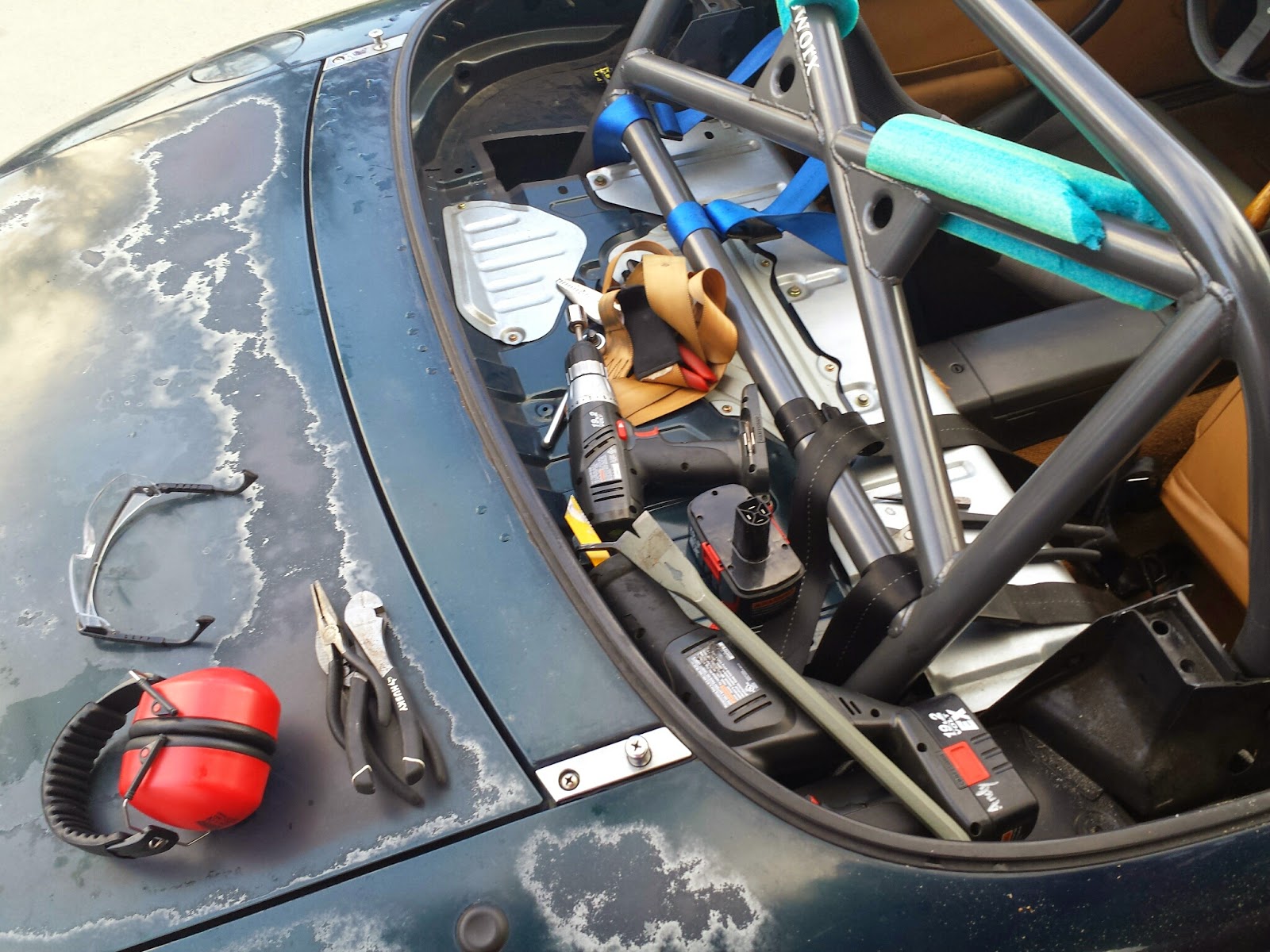 At this point, I thought I was done, but after one drive with the new belt, it was clear something needed to change. It was slipping off Chrissy's shoulders, which is a big problem.  I again thought of a racing seat, but my inner cheapskate tried to think of a cheaper solution.  All I needed from a racing seat was the holes for the belts to go through.  Why not just add holes the the existing seat?  They even have a basic template where the speakers used to be.
We both sat in the seat and marked where the tops of our shoulders sat. 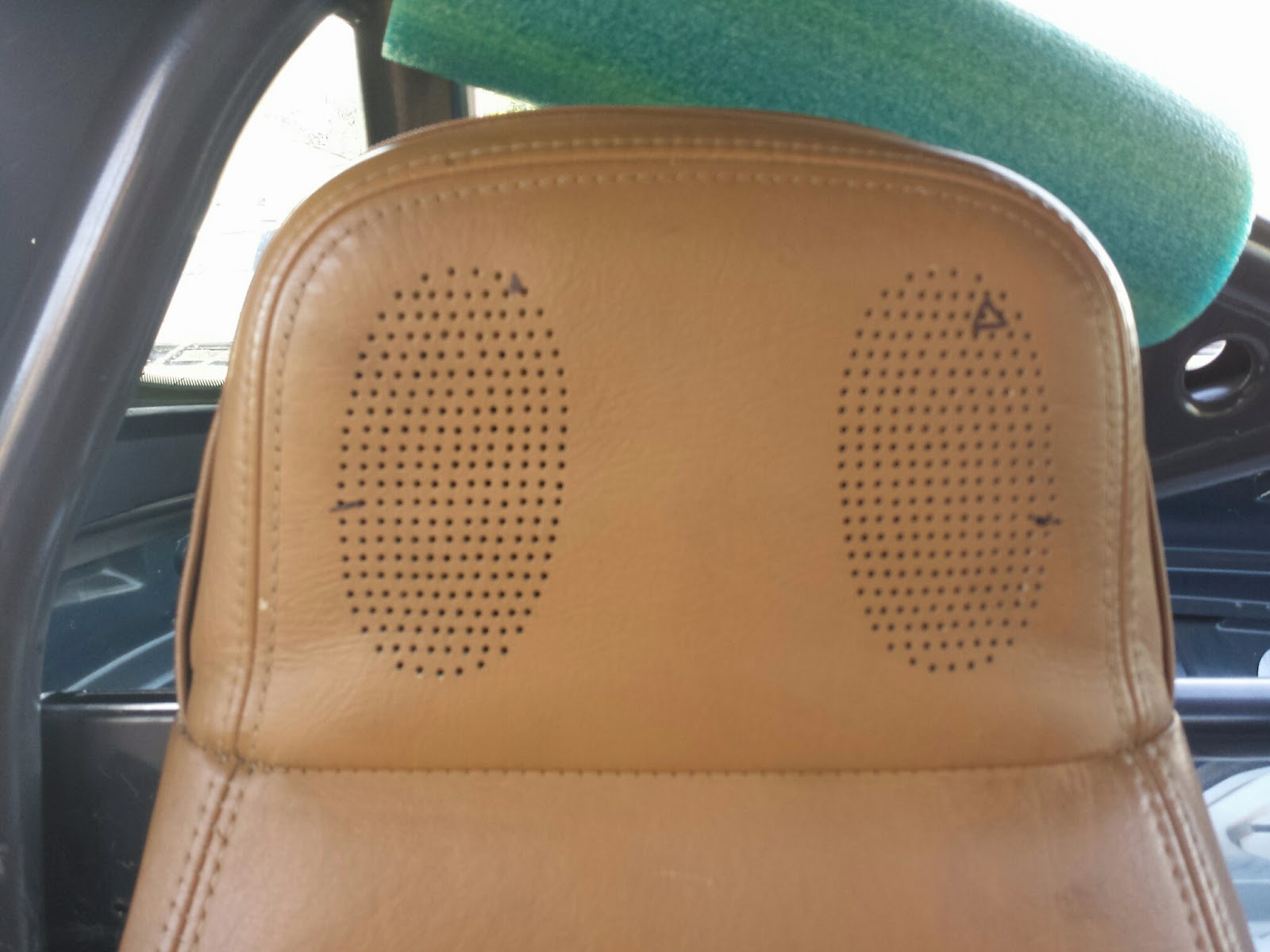 Then I started cutting. 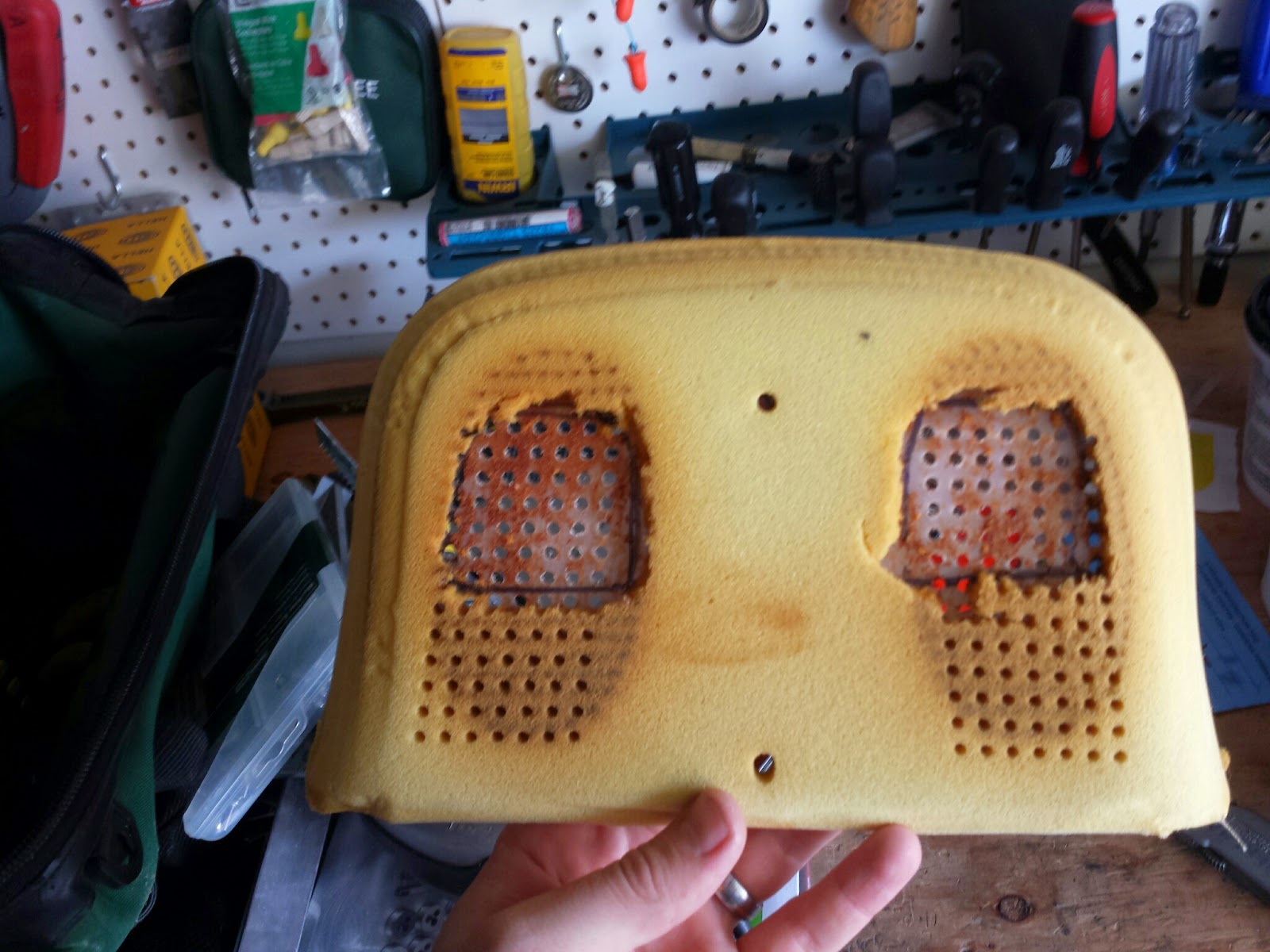 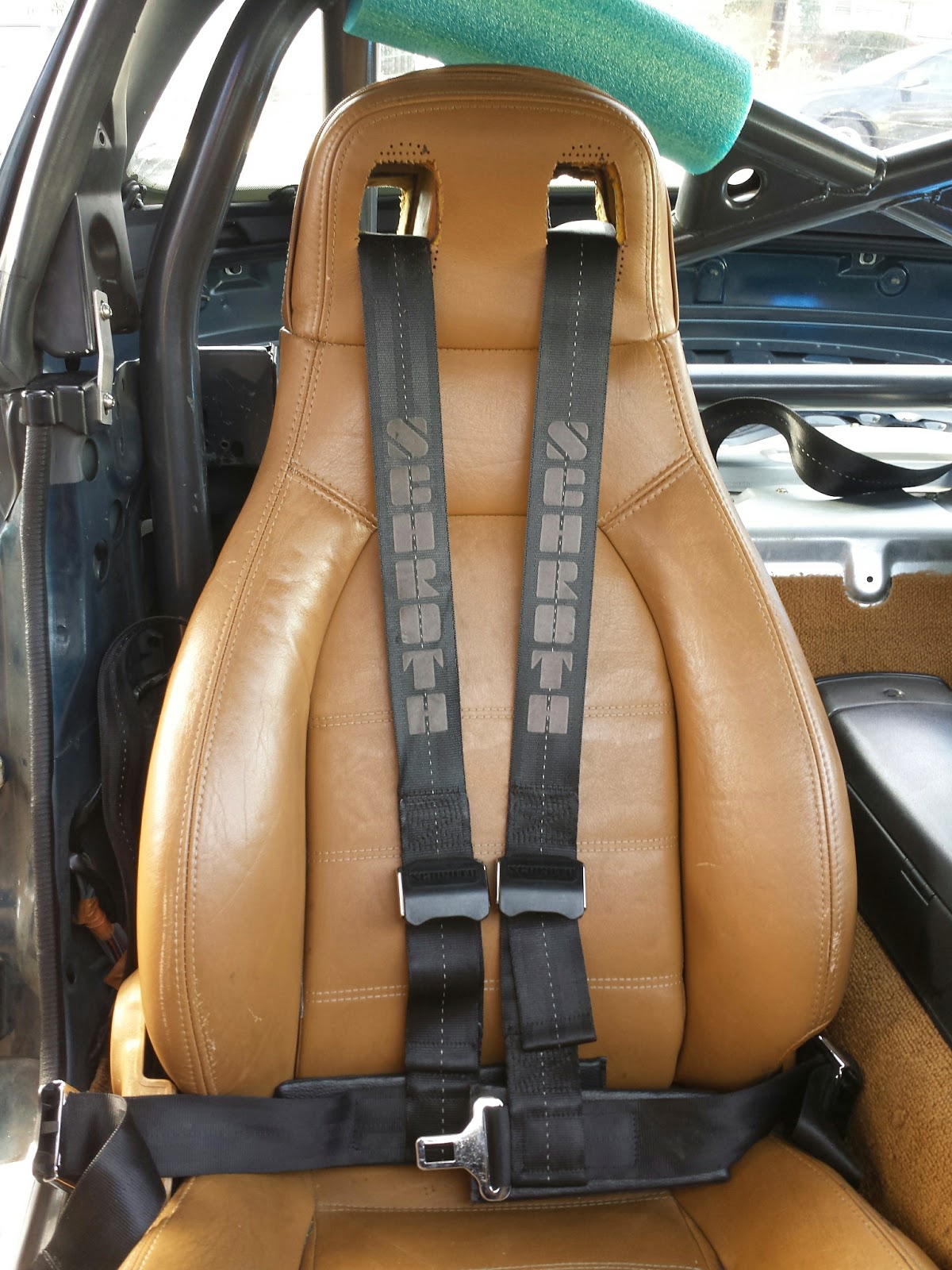 When I was happy with the holes, I did some quality tape work. 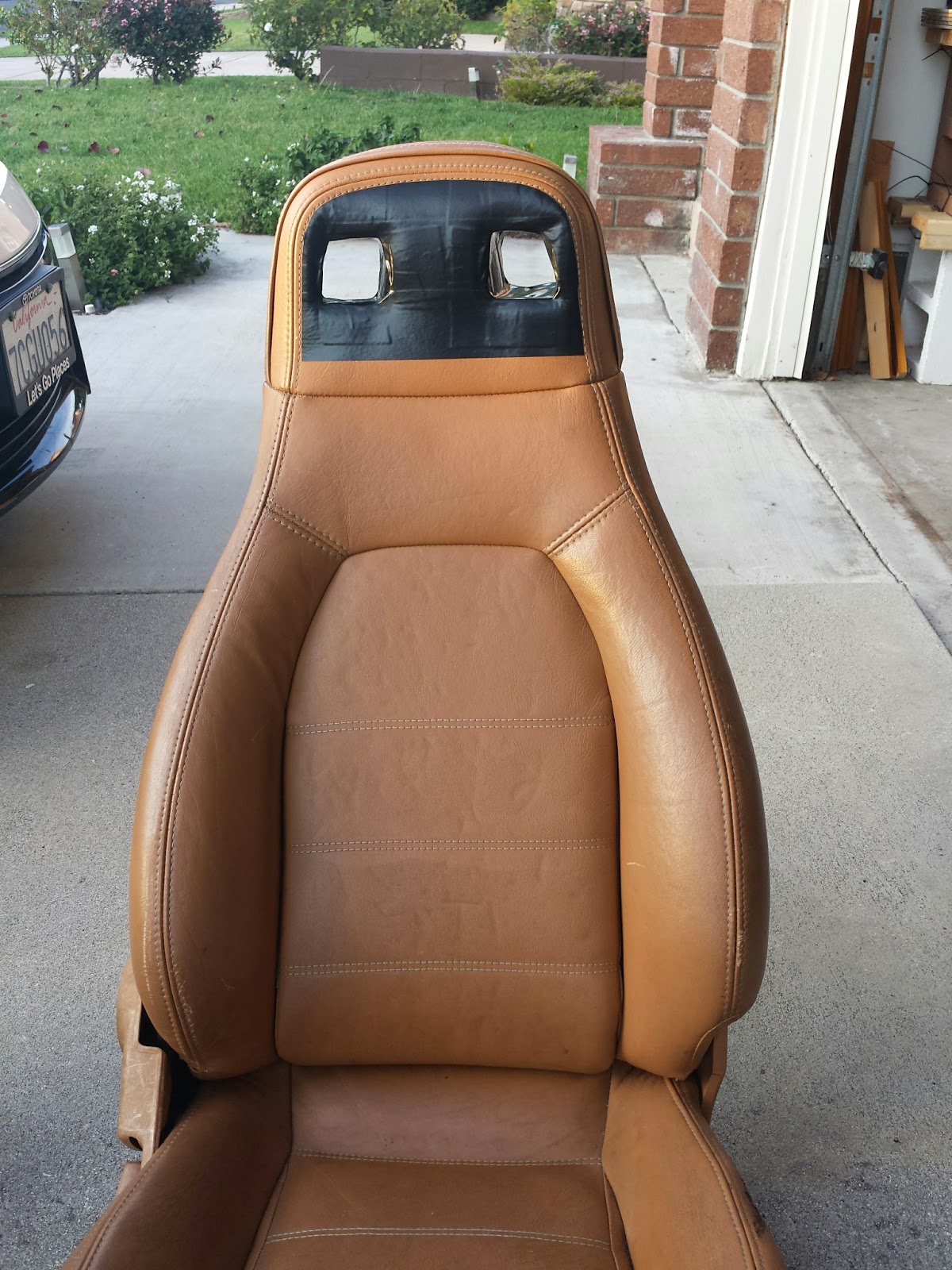 And installed it in the car.  I didn't take pictures, but the back is similarly taped. 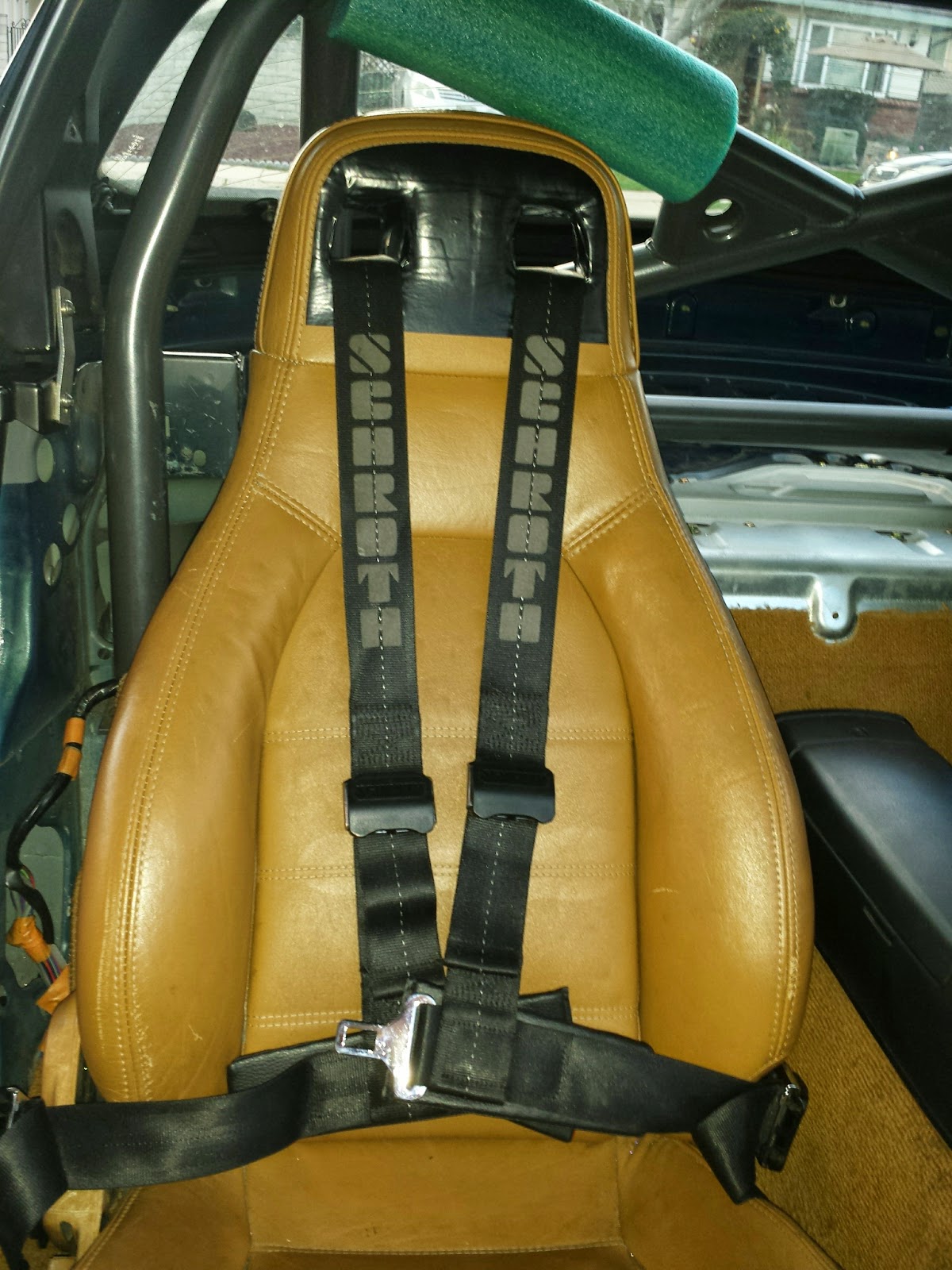 We haven't done much testing yet, but this seems to work perfectly.  I will report back if there are any issues.  I'm a little surprised I haven't seen this done before.  A little searching shows people are really paranoid about four-point harnesses.  I'm all for safety, but they seem a bit crazy.

The final task was to replace the driver side, which looks much better with the black harness.
Weight Removed:  6 lbs
Weight Reinstalled:  2 lbs, 7 oz
Posted by Andy
Labels: Car, Miata