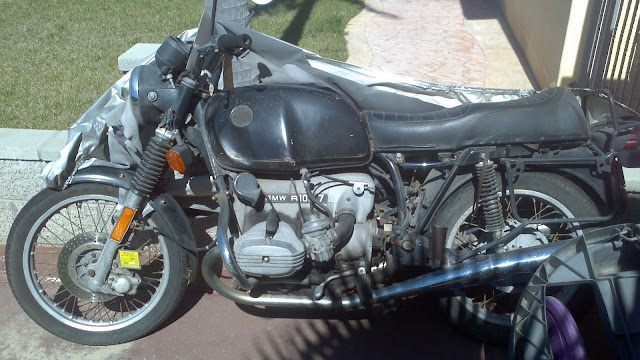 My original plan for the BMW was to bring out the angle grinder, tear the bike apart and turn it into the cleanest, most badass cafe racer this side of the Atlantic.  No mercy.  And also as little money as possible.

Since then, I've changed my tune a bit.  Seeing the previous owner's attachment to the bike gave me pause about hacking it up.  I am also not one to mess with things that work, so my current direction is to simplify the bike, but whenever possible, retain the ability to return it to basically stock condition.

My biggest gripe with the look of the bike is the big rear end/seat.  I thought the only fix would be to chop a foot off the back of the frame.  I then discovered the rear frame section simply bolts to the front section.  This means I can remove it with nary a spark and set it aside.  Meanwhile I can hopefully fabricate a rear subframe exactly like I want.

This philosophy is spreading to other components too.  I am leaning toward buying duplicate versions of things like the exhaust and hacking those up instead of the stock ones.  I know that will add cost, but I will feel better knowing I can always go back to stock if a particular modification doesn't work out.

Now that you know my philosophy, here is a what I want to do to some of the key components:

Bars:  I want to lower the bars.  I think this is the fastest, easiest way to dramatically change the character of any motorcycle.  Rigging up some clip-ons could be neat, but I am leaning toward bolting on some clubman bars, especially because the bike has a really clean mounting mechanism already, and I would like to keep that.

Wheels:  The wheels on the bike are rusty and spoked.  I'm not a big fan of spoke wheels, and they are probably unsafe.  Fortunately, BMW made some really nice looking "snowflake" cast wheels for these motorcycles, and I am leaning toward finding a set of them.  I think it would be a direct "bolt-on" and they look fantastic in black.

Intake:  I desperately want to eliminate the black plastic intake tubes (as seen in the lead photo).  I will probably go with a set of small cone filters (similar to lead photo #2), but I plan to keep the airbox housing in place.  I think that piece is necessary to complete to look of the bike.  I might put the battery there, as in the second photo, but I will make sure it fits within the housing.  I may even try to smooth out the holes on the side of the housing that currently connect to the intake tubes.

Frame:  As I mentioned earlier, I plan to try to build a new rear subframe for a clean look.  It might also be fun to try to convert this thing to a monoshock, but that is not a priority.

Exhaust:  My other big problem with the look of the bike is the exhaust.  I'm not a fan of the big muffler on each side, and I really don't like how they cant upward.  A lot of bikes do this, and I just don't like it.  I want to do something shorter and cleaner.  Ideally it will terminate in a somewhat large diameter piece of tubing, cut at an angle.  I think this is the cleanest, most honest and most badass way to terminate exhaust pipes.  No chrome, no nothing.  My Camaro had it, my SVT Focus had it, and even my Golf TDI has it.  Come to think of it, every car I have ever had an ownership stake in had this type of exhaust outlet.  Interesting.  I think I appreciated the look the most on my Focus.

So that's the plan for now.  I think my next post will show some bikes I have been looking at for inspiration.