It is really important to go into the DMV with a good attitude.  And an appointment.

"I'm sorry, could I actually file for PNO?"  More shuffling, more referncing.  $90.  Hell yeah.  I was prepared to feign ignorance and poverty to weasel my way out of the bill.  This was too easy.  The only catch was they wanted me to bring the bike in for a quick verification, which would be no easy task with 470 lbs of inanimate motorcycle and no truck.  I said thank you and was on my way, already thinking about how to haul this thing in.

The next day at work I began the planning.  I had already signed up to display something at an upcoming lunchtime car show the next Friday.  When I signed up, I didn't know I would have this thing, but it was the most interesting vehicle I had, even in its current condition.  If I was bringing it to work event, I had justification to borrow a work truck to haul it in (I didn't want to take too much advantage of my buddy) and if I already had it in a truck, there would be no harm in taking it by the DMV...  Some quick begging negotiating with a co-worker netted the use of a Tacoma on the Friday in question.  I also arranged to borrow the ramp and straps from my friend (that doesn't count as taking advantage). 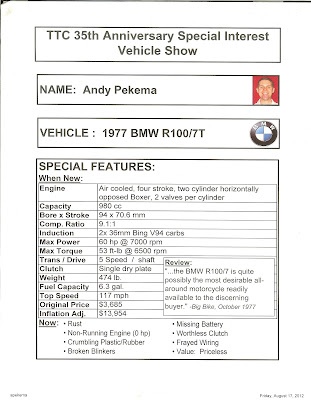 On Friday, August 17th, I had my wife help me load the BMW into the truck and I went off to work.  I got comments on the bike all morning, which was still sitting in the back of the truck in the parking lot.  I printed out my information sheet on the bike and headed to the car show.  I unloaded the bike and instantly had a crowd.  This thing was the star of the show.  Everyone loved it.  The big opposing cylinders and the giant lump of an engine give it so much character, it's hard not to love it.  I think the patina on the bike also draws interest.

After the show, I beat away the fans, loaded up the bike and raced over to the DMV where I had, luckily, made another appointment.  I was led to believe the verification would be quick and easy.  Not so much.

The verification itself was actually pretty simple.  The problem was that after the verification you have to go to the counter again and wrap everything up.  This is where the appointment came to the rescue.  It is amazing that there is pretty much always a three hour long line at the DMV without an appointment, or a five minute line with an appointment.  I'm not sure who is at fault; the DMV for not being able to handle walk-in in a timely manner, or the patrons for not just making a simple appointment.

Anyway, when I got to the counter and handed the fellow all my old paperwork, along with the one new verification sheet, the hemming and hawing started all over again.  Lots of referencing of computers, logs, and coworkers.  Apparently something was fishy.  Big surprise.

Eventually I was informed there was something going on with the bike under the previous owner, and I had nothing to do with it.  The only thing was the issue needed to be reviewed back at headquarters.  Apparently Sacramento wants to look things over and I should hear back in three months.

I went back out to the truck and promptly split my pants right in the scrotum region as I climbed back in.  Good thing I was going home to unload the BMW anyway...

Next time, I will try to share my vision for the project; at least the current vision.
Posted by Andy
Labels: airhead, BMW R100, motorcycle