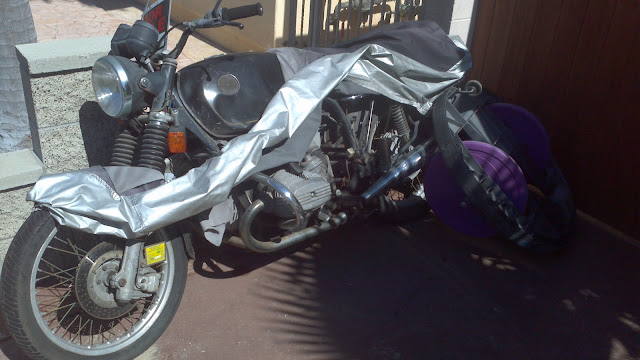 It was early October 2011.  I was on the verge of being "laid-off" at Northrop-Grumman and had already accepted an offer to work at Toyota.  I was feeling good on my usual mid-day stroll through a Manhattan Beach neighborhood and couldn't stumbled upon this beauty of a motorcycle with a FOR SALE sign on it.  I am no expert on BMW motorcycles, so I snapped a couple pictures and headed back to the office to do some research.

The sign said it was a 1985 BMW R1000 and the asking price was $1900.  I quickly learned that particular model of motorcycle does not exist.  The next day I went back to do some further research.

A little research revealed this was a great bike in its day and the basic design was used from 1970 through 1996, so parts are readily available.  It seemed this would make a great project bike, with the obvious centerpiece being the giant lump of an aluminum engine.  This bike has character.

I called the number on the sign and spoke with the owner.  He bought it in 1978 and parked it years ago.  I asked about the price and all he said was he would give me a great deal, which sounded a little off, but I didn't worry.  I knew my master-negotiator skills could take care of that.  The next question was on the status of the title.  I had just gone through a miserable experience trying to register my last car purchase and was not interested in going through that again.  He told me he did not have the title, but he would try to get it.

Over the course of the next 10 months I would periodically email the owner and inquire about the status of the title.  It was quite an ordeal involving the California and New York DMV.  He almost gave up at one point, but I phoned the DMV, got some information and pointed him in the right direction.  The email chain reached 30+ messages by the time he finally got the title.

I will describe the purchase process next time.
Posted by Andy
Labels: airhead, BMW R100, motorcycle