Editor's Note:  I cranked this post out quickly without my usual proof read.  Please forgive any typos, etc.  I have a baby to hold and I will check my grammar later. 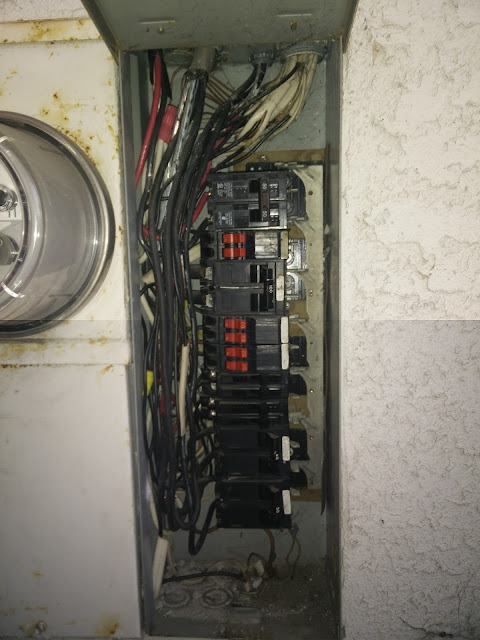 In honor of Leap Day, I will tell you about a big leap we took.  We jumped on the solar bandwagon.
I've been looking into this for a long time, but finally pulled the trigger.  Let me back up and start at the beginning.
I've always liked the idea of being "energy independent," or producing as much or more power than we needed, but the most logical way to achieve that was via rooftop solar panels.  Our house is well suited for solar, with an expansive south-facing roof, but we had one big problem:  shade.  For better or worse, our neighbor had a huge tree just to the south of us, making solar a nonstarter.
Early last year they cut that tree down, and I began my solar quest.  I understood the basic concept of solar (photovoltaic panels + inverter = no electricity bill and no pollution), but I wasn't familiar with some of the details (What does solar cost in 2015? How does net energy metering work?). Luckily a friend of ours was a salesman for SolarCity.  He gave me a zero-pressure crash course in rooftop solar, along with a couple quotes.  Here are my two main takeaways:


I was off to a good start, but things started getting complicated when we tried to size our system. Our electricity use was very stable, then we bought a plug-in vehicle (with additional future plug-ins a real possibility) and were on the verge of having a baby and a stay-at-home parent.  They usually base your system on your previous year of usage, but that didn't make sense for us.  We could wait a year and see how our usage looked, but there were a couple things making me want install sooner rather than later:
I was convinced we should act fast, so I had to try to predict what our usage would be and then convince the solar companies and my utility, Edison, that my estimations were reasonable.

At first we got quotes from a local company as well as SolarCity.  Each quote had it's advantages, but neither felt right.  I thought the local company was slightly overpriced and the warranty was a little short, but they were pretty flexible and would install what I wanted.  SolarCity was kind of the opposite.  While still on the expensive side, they offered an unbeatable warranty, but they weren't flexible in the slightest and were only willing to install a relatively small system.

Dissatisfied with either option, I stewed for a few months and even thought about doing everything myself.  I think I could do the actual install, but all the permits, paperwork, and buerocracy to actually connect it to the grid did not appeal to me.  I eventually decided to get three more quotes.  I tried to find companies that were a little bigger and more reputable than the local firm (so they could offer and honor longer warranties), but still small enough to be flexible and work with me.
In the end, all the quotes were pretty similar.  They each had little positives and negatives, but I eventually decided to go with LA Solar Group (if you happen to get solar through them, make sure to tell them I sent you, or use this link and give them my info).  The main reasons I chose them were because they were flexible enough to do exactly what I wanted, they seemed like a very reputable company (they have the best online reviews), and I really liked the salesman who visited us.

When I was finally ready to pull the trigger, one big question came up:  Do we need to upgrade our main panel?  At first I was trying to avoid it, but I was eventually swayed by logic.  If we kept our old panel it was going to be marginally acceptable, and if we ever wanted to install a high powered vehicle charger, we would have to upgrade the panel anyway.  However, if we did it now, we could include it in the 30% federal solar rebate.
The solar installers could arrange for the panel upgrade, but I really liked the electrician who wired up our hot tub, so I had him come do the panel.  You can see our old panel (with the face plate removed) above.  Our swanky new 200 amp panel is below. 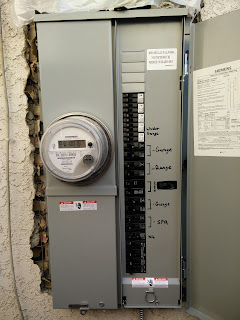 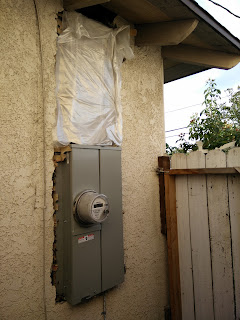 Some stucco work is still needed.  I am waiting until everything is totally done before repairing that, just in case they need to go back in.  The new panel had to meet all the crazy new codes, including this ground rod that goes eight feet into the earth.  They also had to run grounding wires all the way across the house onto the gas and water mains. 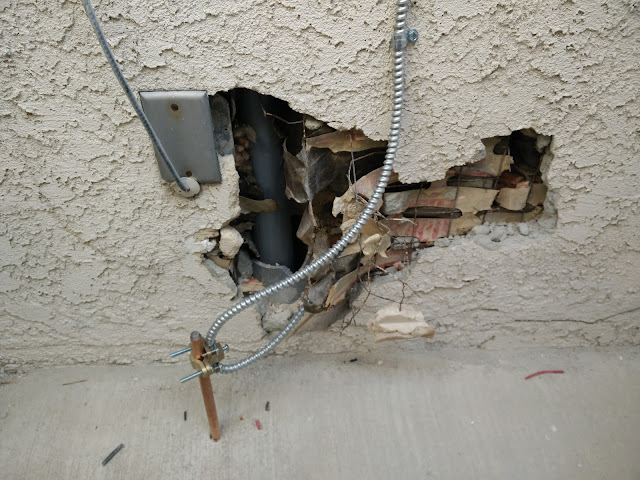 I was clever and had the electrician do a little extra work.  Since our garage only has outlets on the back wall, on questionable circuits, I had one a dedicated 110v outlet installed along with two 220v lines.  One of those is a beefy 50 amp circuit which could cram electrons down the throat of any electric car and the other is a 30 amp which could power a heavy duty welder or air compressor some day.
Once the panel was done, we were ready for solar, which was installed shockingly quickly.  It would have been done in well under a day except the panels themselves didn't arrive in time, so the first day they just did the racking, wiring and inverter. 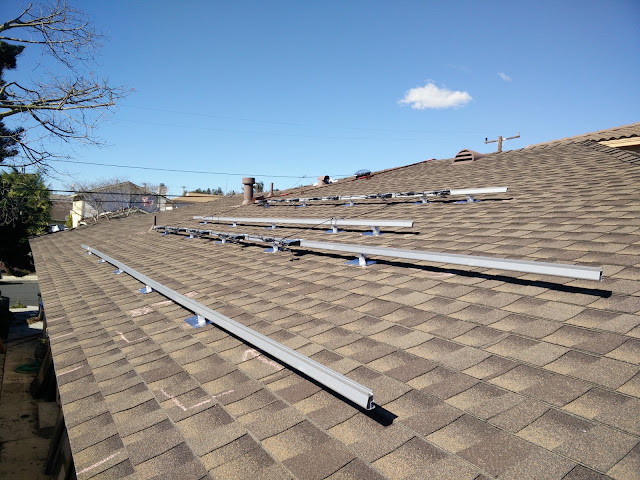 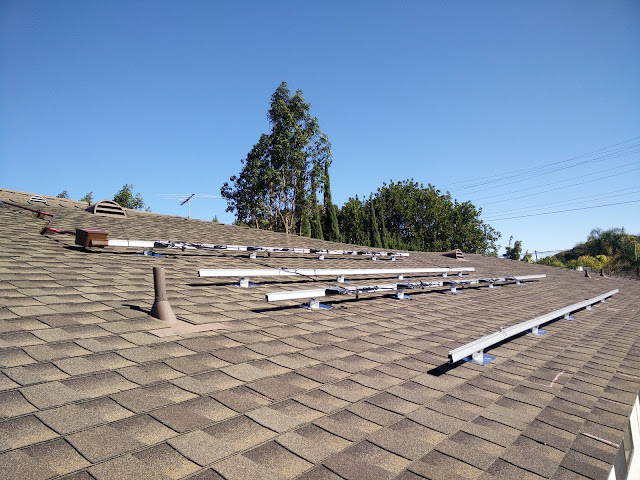 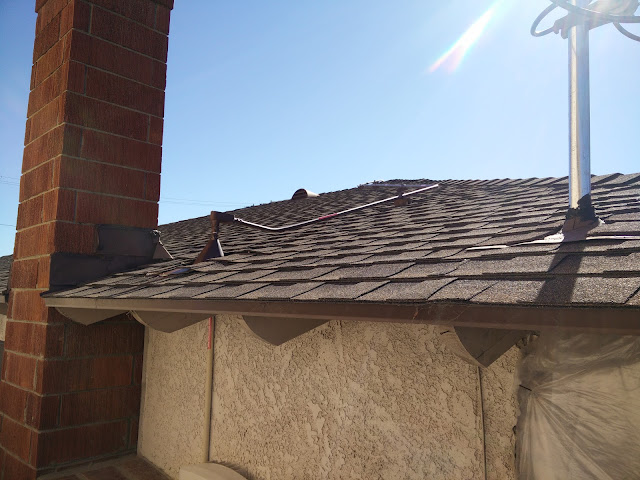 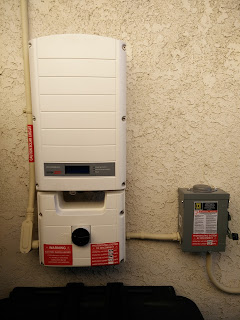 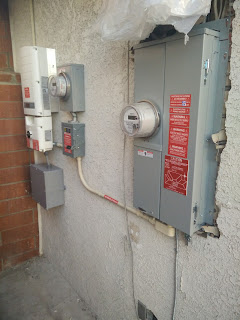 They came back the next day and installed the panels in less than an hour. 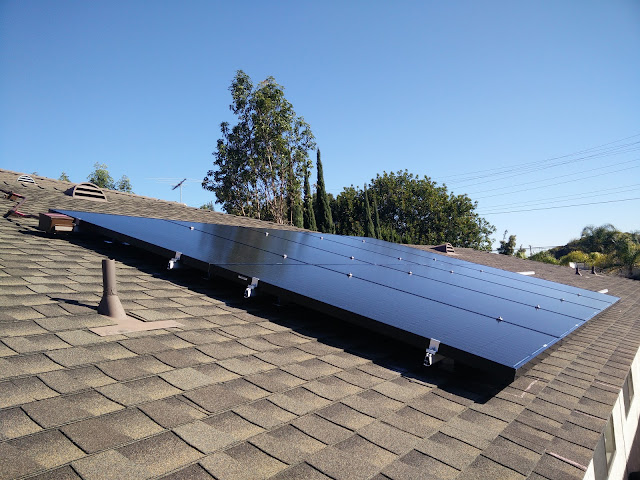 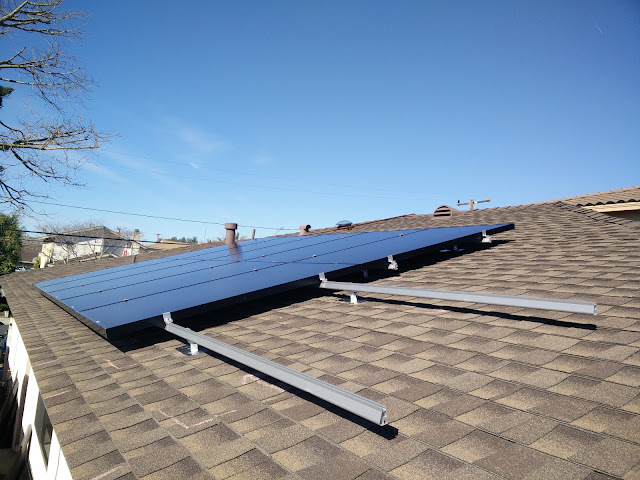 You may notice the extra railing in the photo above.  I asked them to install that so I could easily add one more panel in the future.  This is a little complicated, but I promise it makes sense--these net metering agreements with the utility allow you to add 10% capacity without a whole new agreement.  With that in mind, I specifically asked for a system with 10 panels.  This would make it easy to add one more panel and get exactly 10% more capacity.  The original plan was to use eight 325 W panels, but I had them switch to 10 275 W panels.  I also asked for a slightly higher capacity inverter which could handle more panels down the road.  That cost practically nothing, so I recommend considering that if you get solar.

After everything was installed we had to wait for city inspections, which took a couple weeks, and for Edison to grant us "Permission to Operate," which only took a couple days, even though I was told to expect 4-5 weeks.

The system has now been on for a few days and we are producing more power than we use, which is very exciting financially and environmentally.

Speaking of finances, you might be curious how much all this cost.  We decided to purchase the system to guarantee the maximum return on our investment and to avoid any hassle if we decide to sell our house in the next 25 years.  The total price was around $15,000 for our 2.75 kW system (of that, about $3,000 was for the panel upgrade and the wiring to the garage, which might not be necessary for others).  We should get 30% back on our taxes, so the actual cost will be $10,500 and our expected payback period is about 13 years.