To start this off, we agreed in our initial contract that keys would be given 2 days after the close of escrow in order for the current residents to move out. Our house was vacated early though, so the days weren't needed right?

Patience is a virtue my friends. However, this is a virtue I lack and to be completely honest so does my husband. We closed escrow on Monday the 10th. We recorded on the 11th and when you might ask did we get keys? Not until the 12th despite it being vacant and we were absolutely dying. Impatient #1 and I called our Realtor, the amazing MistyDawn about 500 times. Thankfully she didn’t bat an eye and handled the listing agent like a champ to finally acquire the keys. Side note, if you have a counter offer stating keys will be handed over 2 days after the close of escrow then tell those people Hell No. They don't need the two days, you will want your keys, and it is on  your dime at that point. So, stick with the standard 30 days and keys surrendered after recording. Finally the on the evening of the 12th MistyDawn called and informed us she had keys and we could meet her at the house. I made her jingle the keys just to make sure she actually had them. I’m serious.

When we showed up MistyDawn was waiting for us. She had unlocked the house and prepped a champagne toast area and turned on the lights for us. Andy carried me through the threshold very proper like: 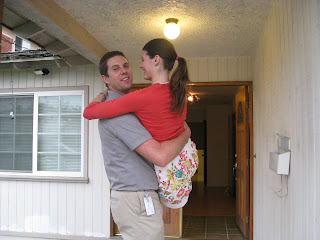 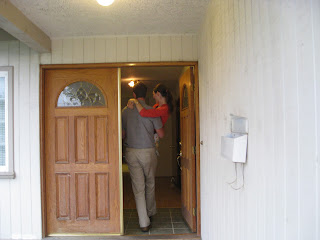 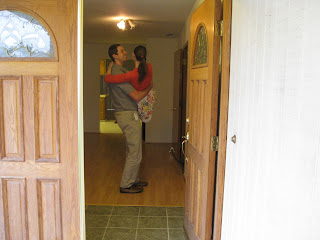 Finally in OUR home! Have we moved in yet? Not entirely. Have we slept there? No. But we have keys and slowly we are taking our stuff over and dropping it off. You see, moving in real life is nothing like moving in the movies (obviously? I didn't think so). Before you move in, you have to clean the whole house and there is mystery dust and sticky stuff that frightens you. Even though our house appeared very clean, it wasn’t. The kitchen had a film of grease on everything and all other surfaces were covered in a layer of dust/fine dirt. Oh, and a bath mat was stuck to the floor in the master bathroom. Ew, more on that later. We are saving larger projects for later after we have been in the house for a little while, that way we know what we need or would like to do.

Anyway, we have a few minor projects underway already so be prepared for more blogs. 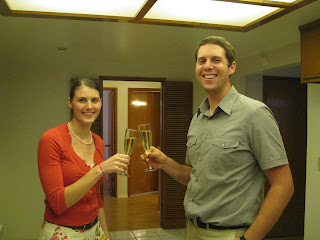