Most of the windows in our house are the original black (why?) aluminum, single pane units from the late 70's, including the kitchen window. They also have no frames or real sills of any kind, making them look pretty sad. However, they still function acceptably as windows, so it's hard to justify replacing them, especially here in temperate SoCal where the insulating properties of double pane windows aren't so important.
Since we were updating everything else in the kitchen, we figured we should go ahead and replace that window now.


The first step was deciding what kind of window we wanted to get. We settled on a white vinyl replacement style window, which allows you to avoid any annoying stucco work. Our opening was just barely under 3' x 6', so we couldn't use a standard replacement.

The first quote we got for a custom window was from the glass shop in my home town, King City Glass, just to get an idea of pricing. We then got quotes from several local shops, but they turned out to be significantly higher. We went ahead and ordered the window in King City and made arrangements with my parents to deliver it on their next visit.

We were told it would take about six weeks for the window to come in, but it took significantly less. My parents brought the window down shortly after it came in and we were ready to install.
The first step was removing the old window panes. 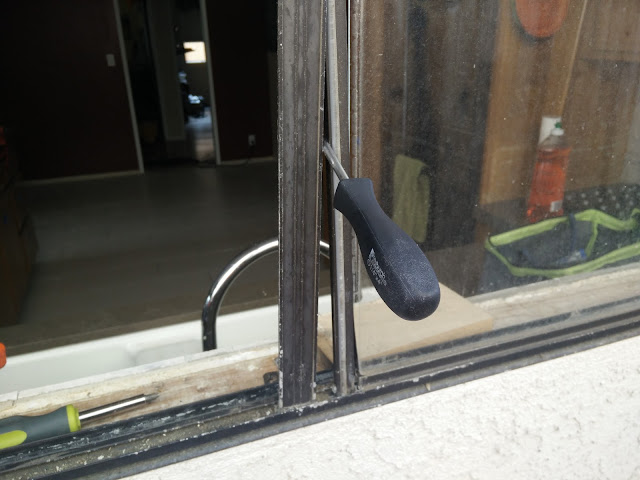 I then marked the high spots in the stucco around the window and chipped them off. That would allow the flange on the new window to cozy up to the wall better. 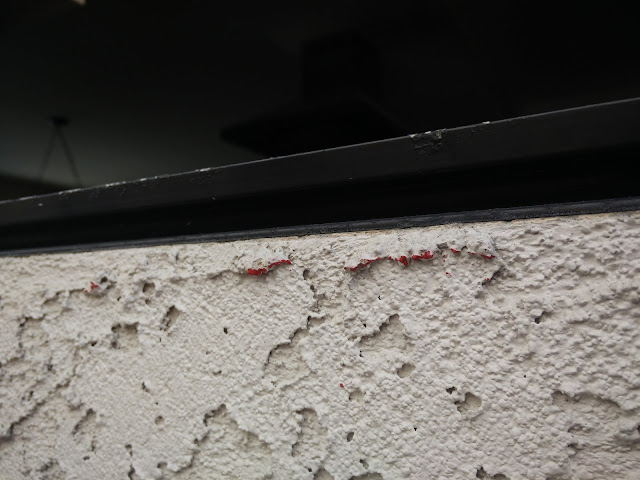 I applied a bunch of the sealant provided by King City Glass and we slid the new window into place. I used some bar clamps to hold it in place (thank you, internet, for that tip). 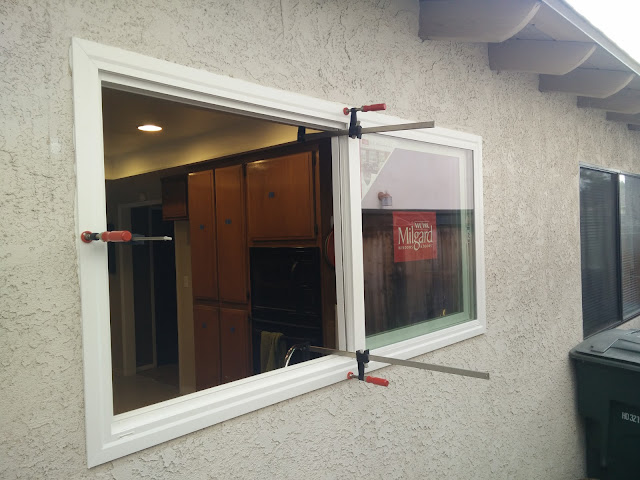 I then went inside and pre-drilled my screw holes, with two different sized bits and screwed the window to the house with some special screws. 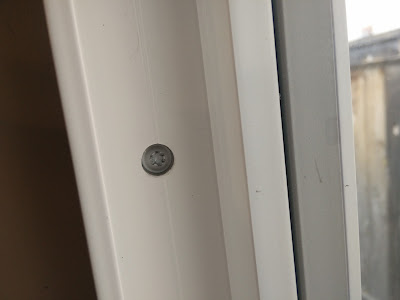 I then installed spiffy little caps over the screws. 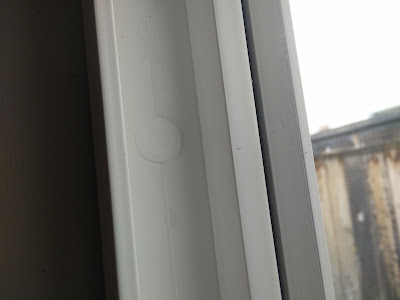 Next I went outside and installed a nice bead of sealant around the entire frame. 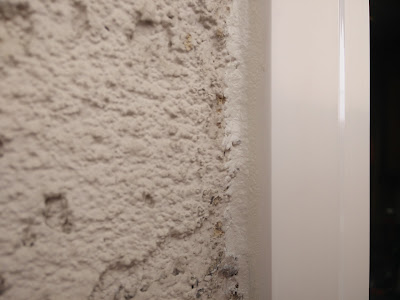 And that pretty much wrapped up the actual installation of the window, but not the project. We still had to trim it out on the inside. As you can see, it looked pretty rough in there. 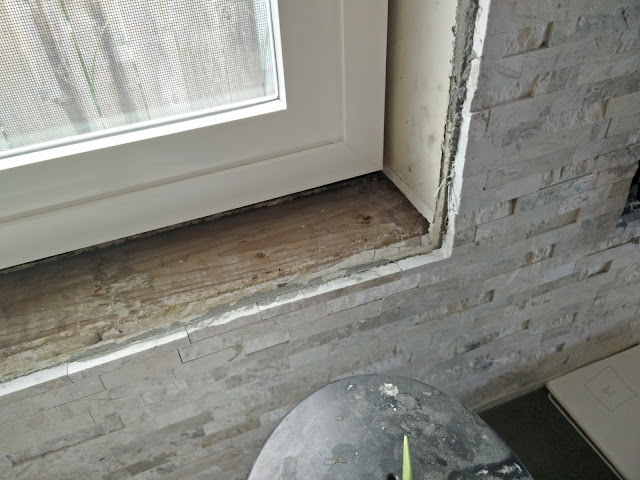 I started with my favorite activity (NOT!), painting trim...so much trim. 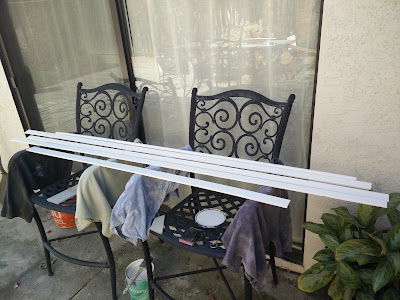 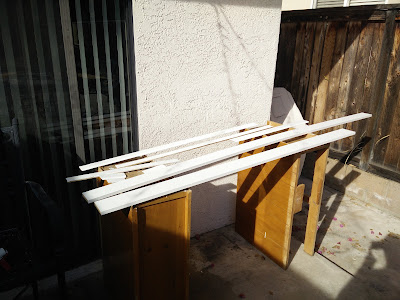 Next I glued down the quartz sill piece that was cut when we got the new countertops. 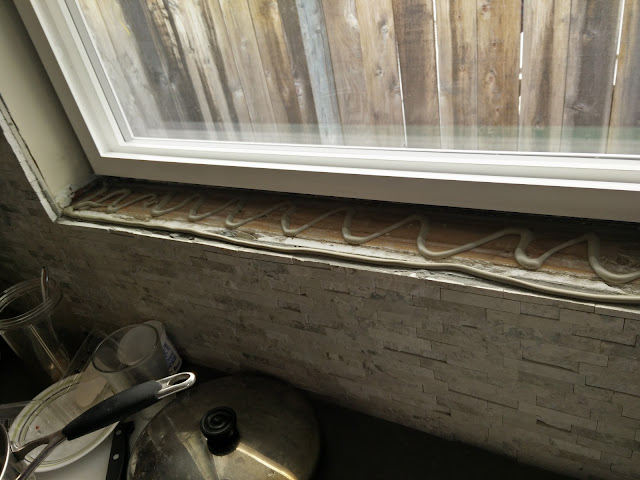 I then installed most of the trim and things started looking pretty good. We were only missing the top and bottom pieces, which we thought we had under control, but actually didn't. 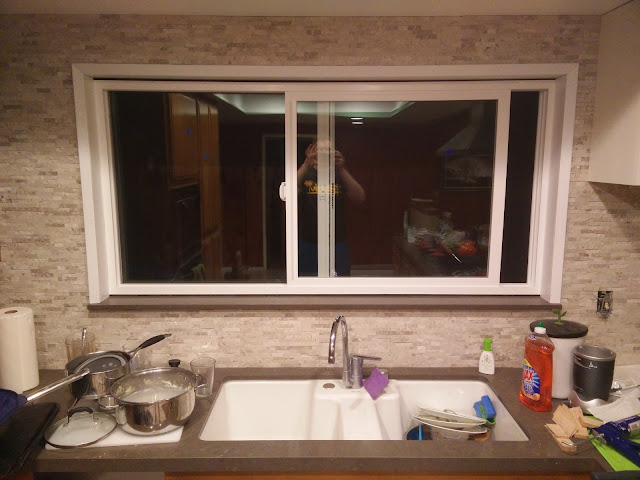 After acquiring and painting the correct trim, the top piece was nailed in and the bottom piece was glued in place (didn't want to try nailing into quartz or vinyl). 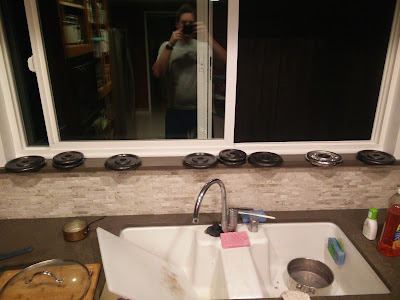 As a reminder, here's the old window again:
And here's the finished product. It's just a slight improvement.
A big thanks to King City Glass and my parents for getting us the beautiful new window at a surprisingly low cost.