Luckily, my brother was around to help remove the mirror an the old countertop. 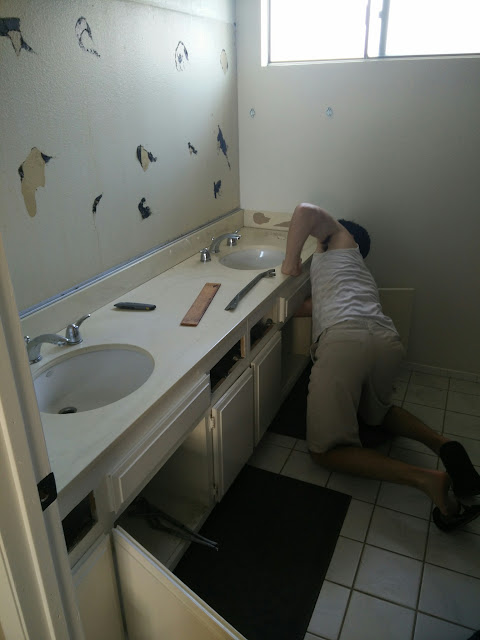 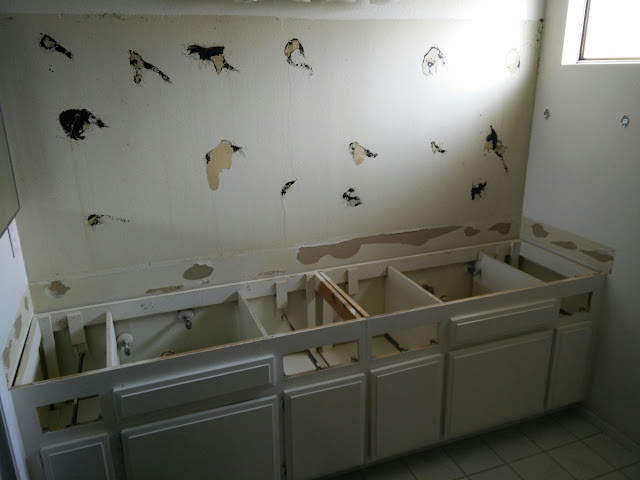 After a couple days without the counter, the new one was installed. It looked great, except the counter that was installed was not quite the same color as the counter we chose. Oops.
Fortunately, we were OK with the accidental color and the installer admitted the mistake, giving us a nice discount to make up for it. Overall, I was very pleased with the result. 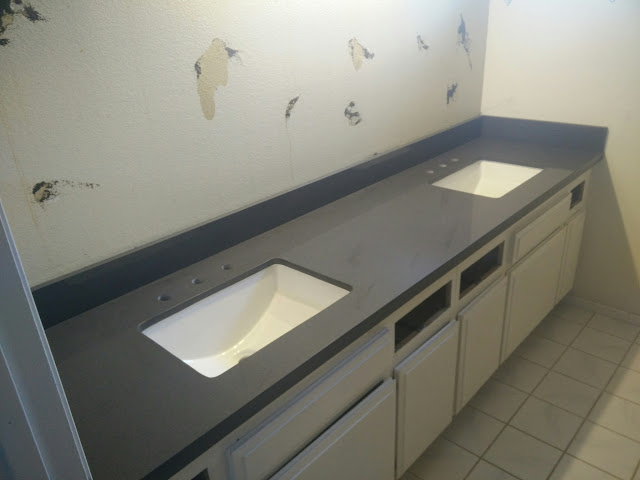 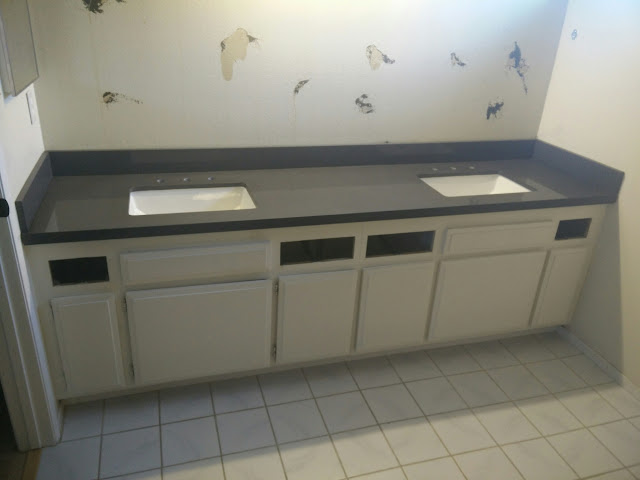 The next step was for me to reinstall all the hardware. I discussed that in detail in the guest bath post, so I won't repeat it here. 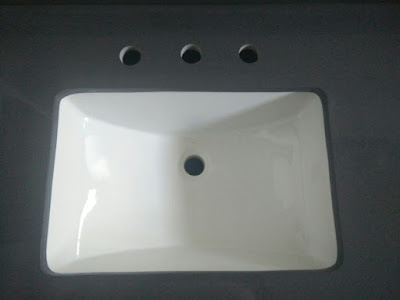 The one difference is that one of the valves decided to start leaking while it was off, so I had to buy an annoyingly expensive replacement on Amazon. 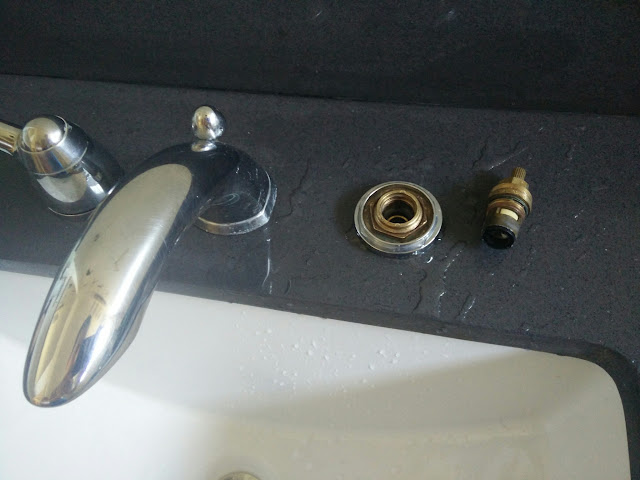 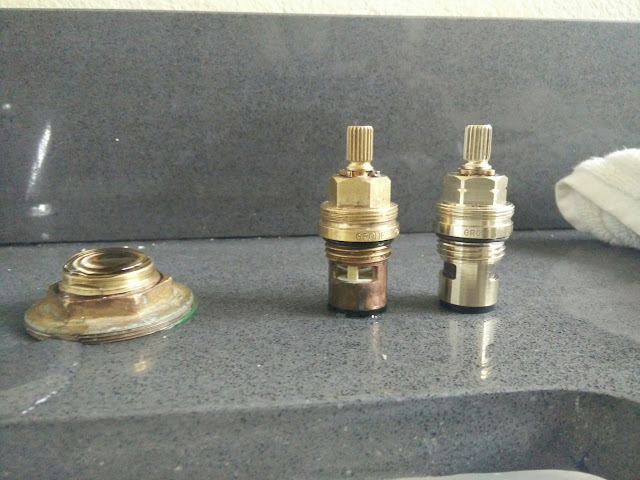 Once the counter was under control, we moved on to the cabinetry. I started by removing all the doors and smoothing the face of the cabinet. 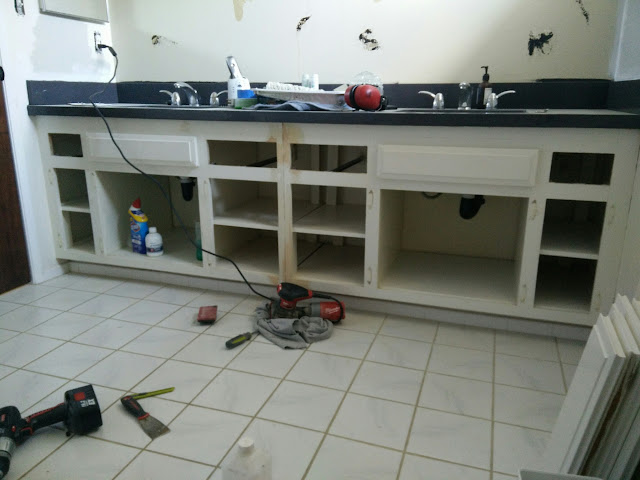 You can see the quality paint job on all the doors. Everyone knows you don't need to paint the bottoms of doors. 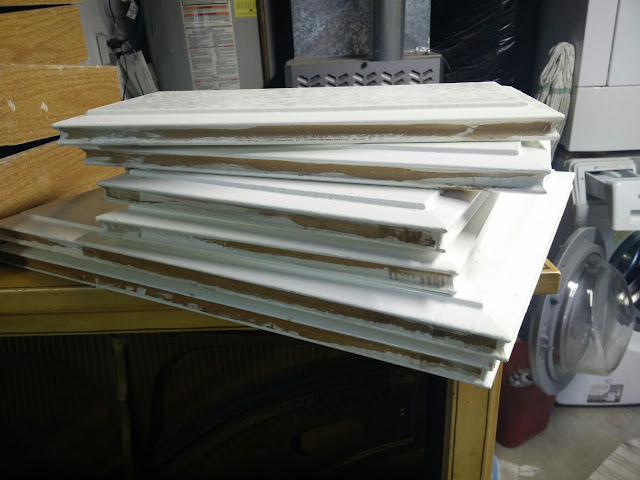 I got a little dirty when sanding them in preparation for new paint. 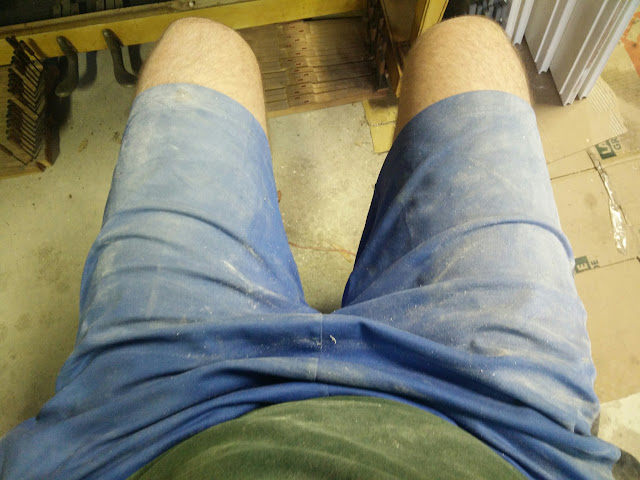 As you saw in the kitchen, I had to repair one of the drawers. 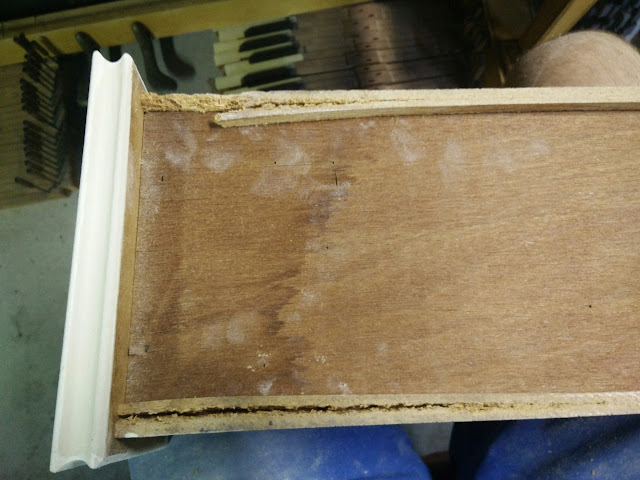 One side was fixable with just some glue. 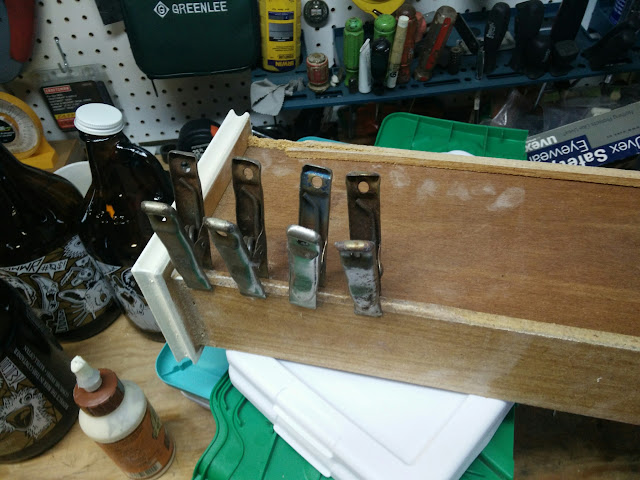 The other side had to be replaced. 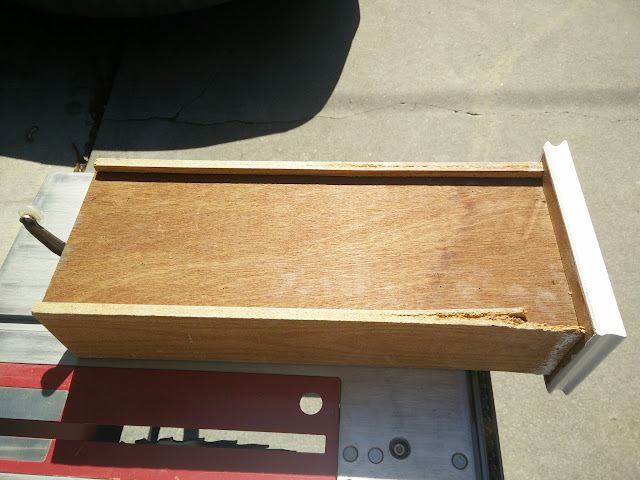 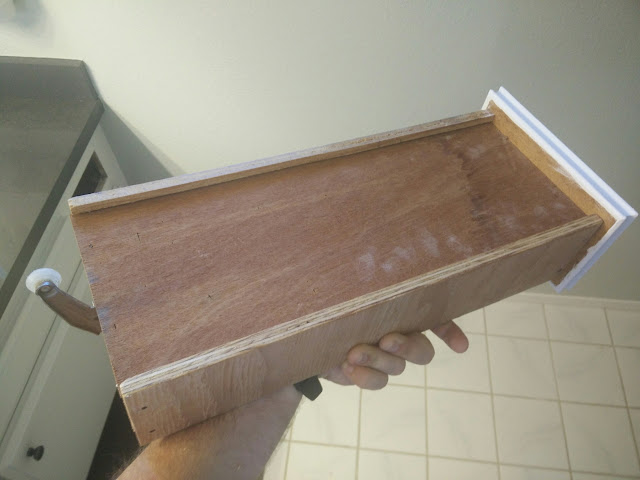 After a meticulous primer and paint job on the cabinet, doors and drawers (sorry; no pictures), our next step was to find some hardware for the cabinet. This would let us avoid touching the new paint with our dirty hands every time we need to open anything.
We briefly considered these oddly phallic knobs, but decided against them. 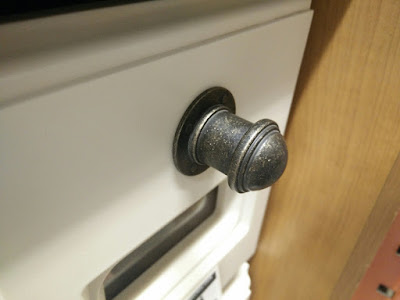 After way too much effort, we found some knobs we liked and were ready to install them. Drilling holes in your perfectly finished work is stressful, but had to be done. 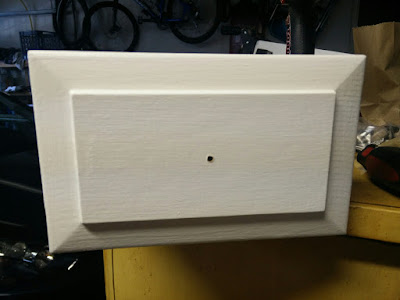 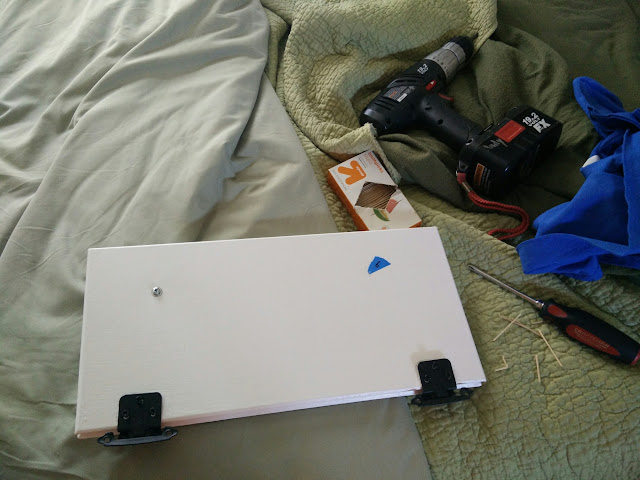 Here's what it looked like once everything was installed. We were surprised to find the knobs we liked best at Target. The home improvement stores didn't have a very good selection of black knobs to choose from. 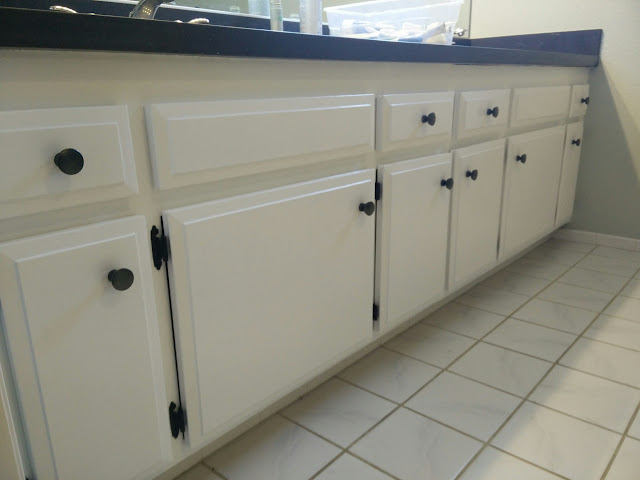 After the cabinets came new paint for the walls and ceiling. My parents helped scrub the room to prepare for the new paint. 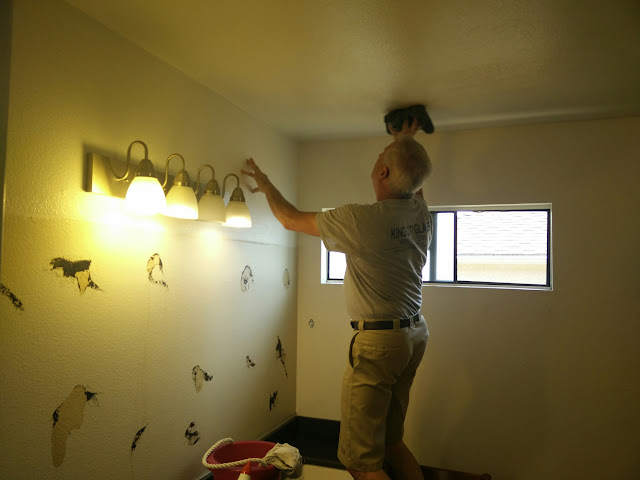 The ceiling got a fresh coat first. We also spray painted the old furnace vent and light fixture. 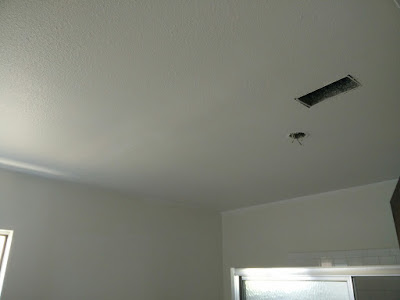 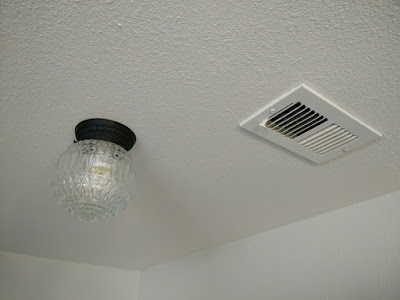 We had quite a time trying to pick a color. The incorrect counter made it more difficult to find something that would go with it as well as making sense with the colors in the bedroom. This is a test of the gray from the office. It didn't make the cut. 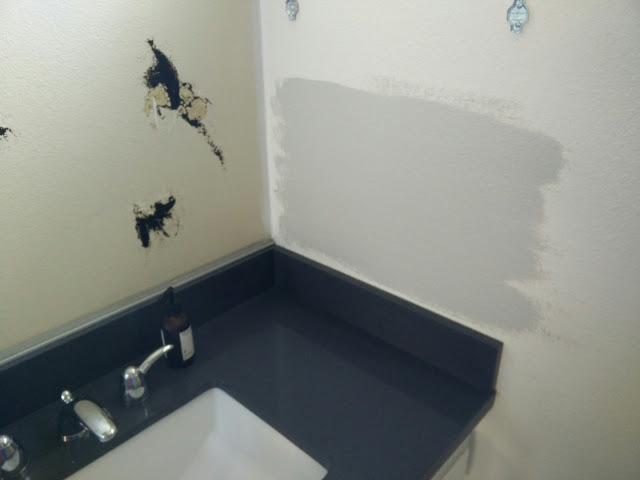 Chrissy eventually found a great color called Sea Salt. It's a light grayish, greenish, bluish color that goes well with everything. It's a subtle color, especially in photographs, but it looks really good in person. 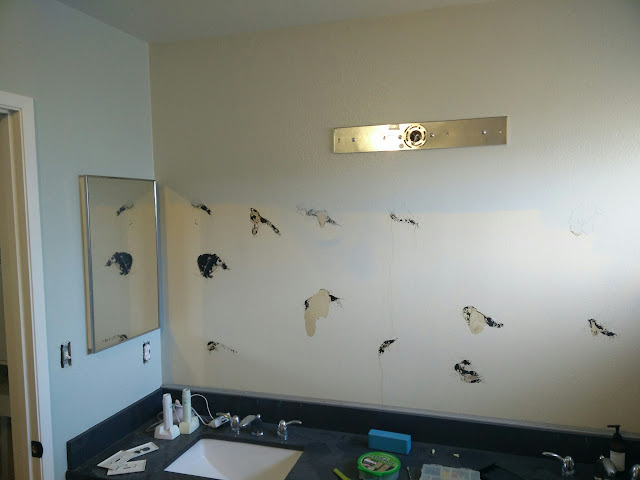 With the walls painted, we could reinstall the mirror. We decided to add a couple clips to the mirror because the glue that held it before we removed it was starting to fail. With new glue and the clips (held with stainless steel screws), the mirror won't be going anywhere. 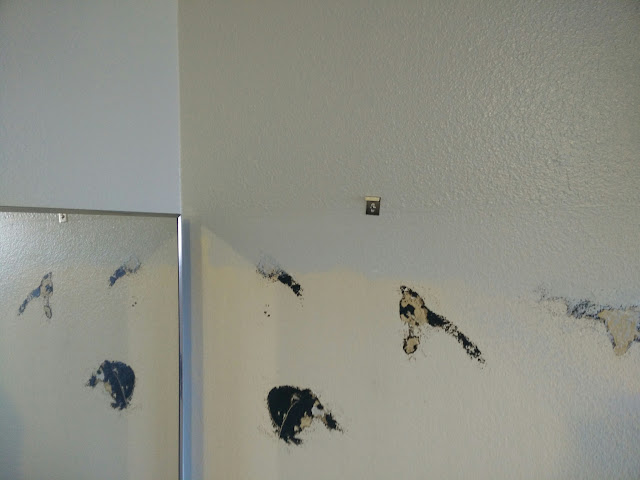 The finishing touch was adding molding around the mirror, similar to what we did in the guest bath. If you do this, remember to paint the back side of the molding because you can see its reflection in the mirror. Also don't put glue too close to the edge for the same reason. 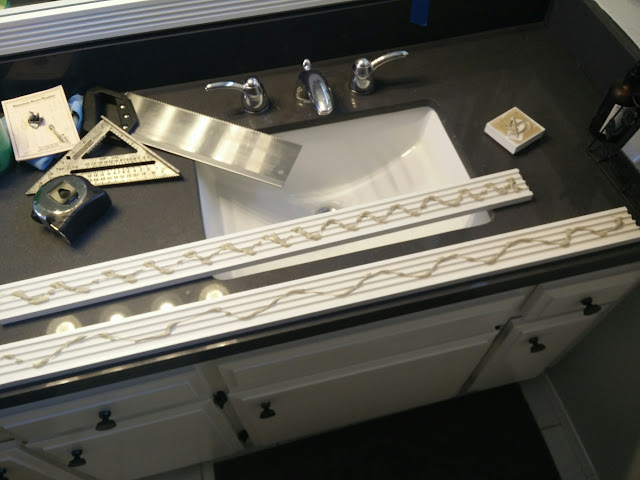 One fun detail was slimming down the top left "rosette" so the medicine cabinet could open. 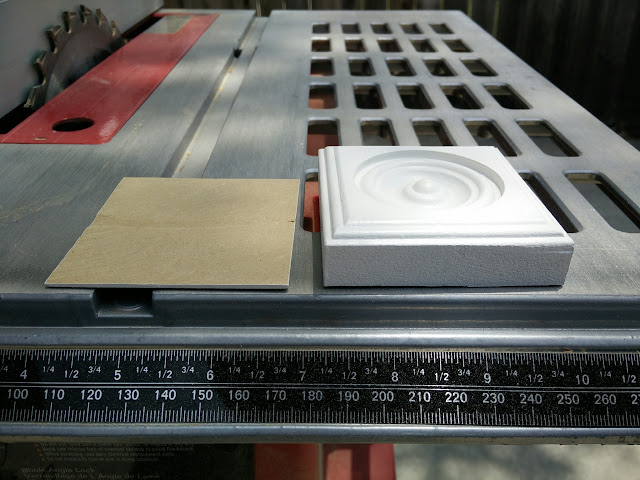 After all that work, the bathroom was finally done.
I think it looks pretty good, considering we didn't completely gut it. Someday we would like to put in a big walk-in shower and new tile on the floor, but we are pretty happy for now. 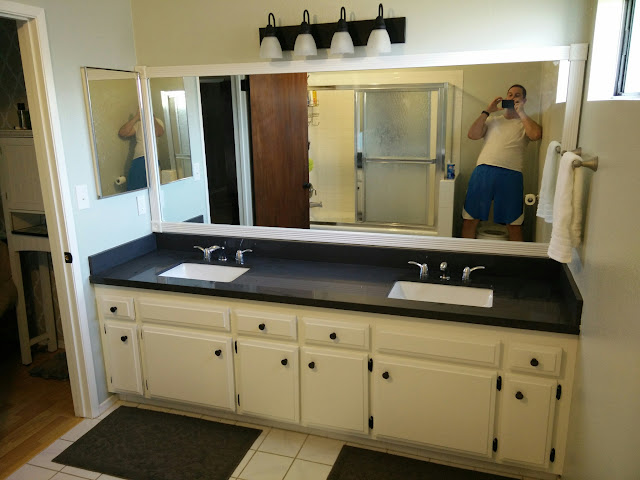 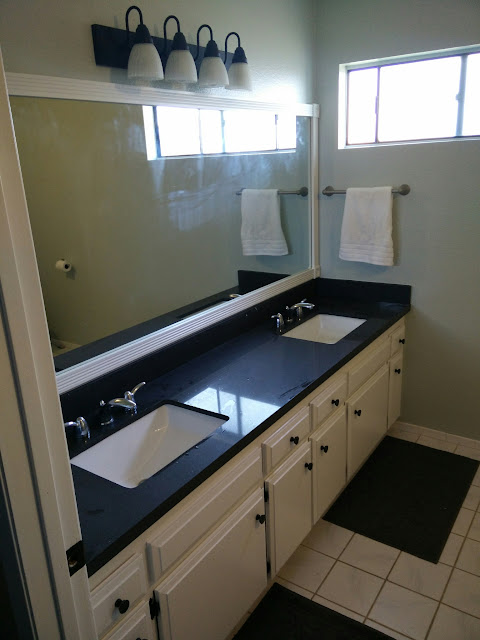 Here's the before shot again. 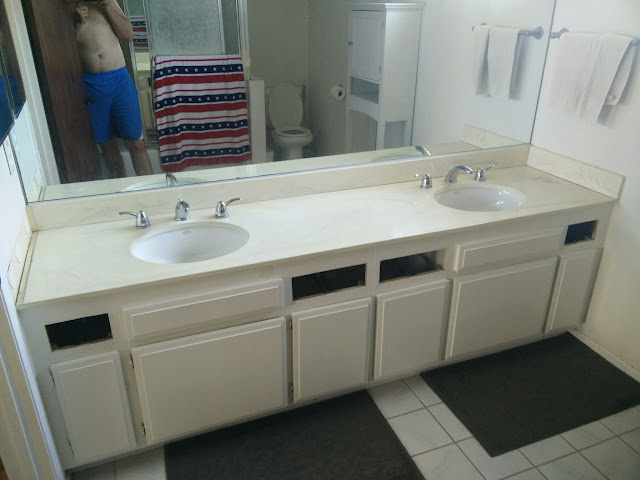